It’s hard to believe it has been so long, but in September of 2009, Pee-Wee Herman made his big comeback, and started actively using Twitter. Now, Paul Reubens (the actor who portrays Herman) has found his way to SXSW in Austin this weekend.

He’s been in town promoting “The Pee-wee Herman Show on Broadway!” for HBO and hanging out with Jake Gyllenhaal (who hasn’t?) and Facebook. 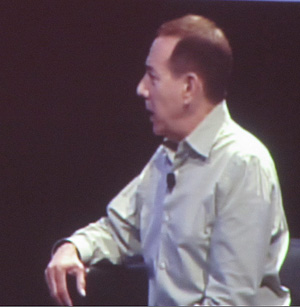 JoBlo.com Editor-in-Chief Mike Sampson interviewed him on stage at the event. He spent some time talking about his beginnings with the comedy group The Groundlings and the Gong Show, as well as an old HBO special.

“When I look back at the original HBO special, I’m always struck with how sweet Pee-Wee is. He was never that sweet again.” He says people always say their favorite Pee-Wee moments are from when he’s angry or pissed off, and that he tries hard to bring that to people, even though he’s not like that at all.

He then talked about how to do this (the Pee-Wee character) and be old at the same time. “I think you’ll be seeing me in a turtleneck soon,” he says, joking about Pee-Wee’s increasing age. “It’s ironic to be here now, grappling with that,” he says.

He said the reason he could pull it off with his comeback, was because he would be on stage, and nobody would be close enough to notice age…”but then we filmed it in Hi-def…”

He says he’ll be grappling with it for a while.

He said he’d give anything to tell the audience what the plot of the upcoming Judd Apatow movie will be, but he promised he wouldn’t. “You’d laugh your asses off,” he said.

“The Internet is changing everything,” he says. “You can’t do anything in secret. That’s great in lots of ways, but not so great in other ways.”

Pee-wee has also been keeping in the loop with SXSW Interactive news and festivities:

Pee-wee HermanThere’s a marching band outside the convention center! You guys didn’t have to go to such trouble!

“I’m as involved as I can be with the schedule that I have, and I love social media…I’ve got my iPhone and Foursquare…I love it all,” Reubens said.