Google Takes Popular Email App from iPhone For Itself

The competition between Google and Apple appears to be getting fiercer by the day. Google has now acquired popular iPhone app reMail, and has discontinued it in Apple’s App Store, and most likely offer it in the Android Market (although this has not been confirmed). 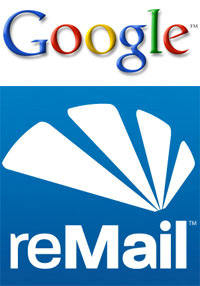 reMail was created by a former Google employee, who used to work as a software engineer on Gmail. "Gmail is where my obsession with email started as an engineering intern back in 2004, and I’m thrilled to be coming back to a place with so many familiar faces," Remail creator Gabor Cselle says on his blog. "reMail’s goal was reimagine mobile email, and I’m proud we have built a product that so many users find useful."

Although reMail has been removed from Apple’s App store, those who have already downloaded will continue to be able to use it. Support will be continued through March.

"We’ve enabled all paid reMail features for you: You can activate these by clicking ‘Restore Purchases’ inside the app," explains Cselle. "reMail downloads email directly from your email provider to your phone, and your personal information, passwords, and email are never sent to or stored on our servers."

This week at Mobile World Congress, Google CEO Eric Schmidt stressed the importance of mobile to Google’s strategy. This acquisition, which some have considered to be a slap to Apple’s face, is only the latest piece in that puzzle. It will be interesting to see if Google goes after any more apps from Apple’s store. The company has certainly been in the mood for acquisitions. Just last week, the company acquired social Q&A site Aardvark.