Back in late 2009, Google announced the launch of Google Public DNS, its free global domain name system resolution service, which allows people to use it as an alternative to their current DNS providers.

It’s now the biggest such service in the world, according to Google, handling an average of over 70 billion requests a day. Google Public DNS software engineer Jeremy K. Chen writes on the Official Google Blog:

DNS acts like the phone book of the Internet. If you had to look up hundreds or thousands of phone numbers every day, you’d want a directory that was fast, secure and correct. That’s what Google Public DNS provides for tens of millions of people.

Google Public DNS has become particularly popular for our users internationally. Today, about 70 percent of its traffic comes from outside the U.S. We’ve maintained our strong presence in North America, South America and Europe, and beefed up our presence in Asia. We’ve also added entirely new access points to parts of the world where we previously didn’t have Google Public DNS servers, including Australia, India, Japan and Nigeria.

Shortly after launch, we made a technical proposal for how public DNS services can work better with some kinds of important web hosts (known as content distribution networks, or CDNs) that have servers all of the world. We came up with a way to pass information to CDNs so they can send users to nearby servers. Our proposal, now called “edns-client-subnet,” continues to be discussed by members of the Internet Engineering Task Force. While we work with the IETF, other companies have started experimenting with implementing this proposal.

Google Public DNS complies with the Google’s main privacy policy, and collects the IP address (temporarily), ISP, and location information (in permanent logs). Google says this is to make the service “faster, better, and more secure.” The data is used for debugging purposes, as well as to analyze abuse and improve prefetching. IP info is erased after 24 hours. 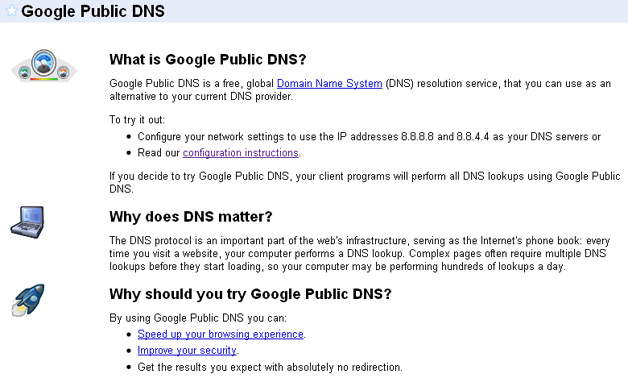