YouTube announced today that it is testing a new feature called the YouTube News Feed, which it is working on with the University of California at Berkley’s Graduate School of Journalism. The feature would track news as it breaks on YouTube.

"Whether it’s an altercation between a Congressman and a student in Washington, D.C., violent attacks against ethnic minorities in Kyrgyzstan, or oil washing up on a beach in the Gulf Coast, videos uploaded to YouTube by both amateur reporters and professional journalists move through the media ecosystem with a sophistication and speed greater than ever before," says YouTube Head of News & Politics Steve Grove. "But with 24 hours of video uploaded to YouTube every minute, how can people more easily find the latest breaking news videos on our site? And how can media organizations better leverage this content to expand the scope of their reporting and keep us all better informed?"

YouTube says the news feed will provide a stream of breaking news videos on YouTube, with a focus on strong visuals, non-traditional sources, and the latest uploads.

The feed will reside on CitizenTube, YouTube’s news/politics video blog. Updates will also be posted to the CitizenTube Twitter account. 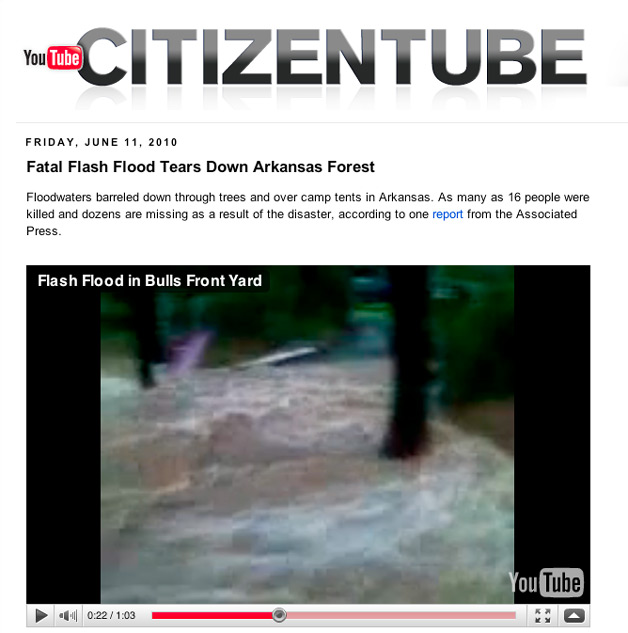 YouTube is not necessarily a news source first and foremost. If it were, the top videos of all time would probably reflect that. However, YouTube is becoming an increasingly important piece of the news pie, for multiple reasons. For one, more people have video cameras in their pockets at all times (their phones) and are able to break news as it happens. Secondly, YouTube is the second largest search engine, behind Google, and people search for visuals to go with news items.

The news feed makes perfect sense as a YouTube feature, and it would not be surprising to see the feature make the leap from CitizenTube to YouTube itself sometime in the future after proper testing.

While YouTube says it’s focused more on non-traditional sources, one can envision such a feature being a go-to place for news from a variety of sources, much like Google News to articles.

We’ve reached out to YouTube for more details. We’ll update when we find out more.

Update:  Aaron Zamost from YouTube’s news division tells me, "Honestly, there’s not much more we can say beyond what we’ve written in the post, since, as you noted, this is a test. But we’re very excited to see where this takes us over the summer."

We’ll be interested to see what happens with it as well.

Would you use a YouTube news feed as a news source? Let us know.