"We have seen that women across the globe share some similar usage patterns online, such as strong engagement with social networking sites, but it’s also important to understand gender differences on a regional, country and local level, where cultural differences are continually shaping online usage and content consumption."

Across each global region, Social Networking reached a higher percentage of women online than men. Social networking’s reach among women is highest in Latin America where it reached 94.1 percent of females online, and in North America where it reached 91.0 percent of females. Europe saw 85.6 percent of its female online population visit a social networking site in May 2010, while in Asia Pacific, where parts of the region still face low broadband penetration and site restrictions, reported a 54.9-percent reach. 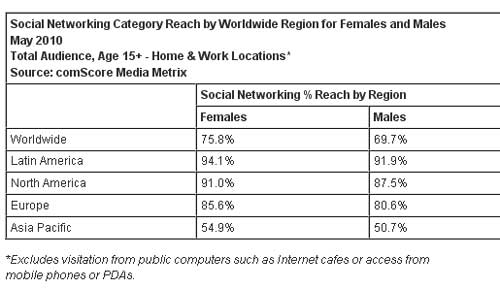 *Although men are in the majority across the global Internet, women spend about 8 percent more time online, averaging 25 hours per month on the Web.

*Globally, women spend 20 percent more time on Retail sites overall than men. Among the various retail sub-categories, Comparison Shopping and Apparel sites reached the highest percentage of women at 24.8 percent and 18.7 percent, respectively, in May 2010.

*In the U.S., women are more avid online buyers than men, with 12.5 percent of female Internet users making an online purchase in February 2010, compared to 9.3 percent of men.