To mark the 10th anniversary of Wikipedia that takes place Saturday, the Pew Internet & American Life Project has released data about who uses the site and how its audience has grown over the years.

The percentage of all American adults who use Wikipedia to look for information has increased from 25% in February 2007 to 42% in May 2010. This translates to 53% of adult internet users. 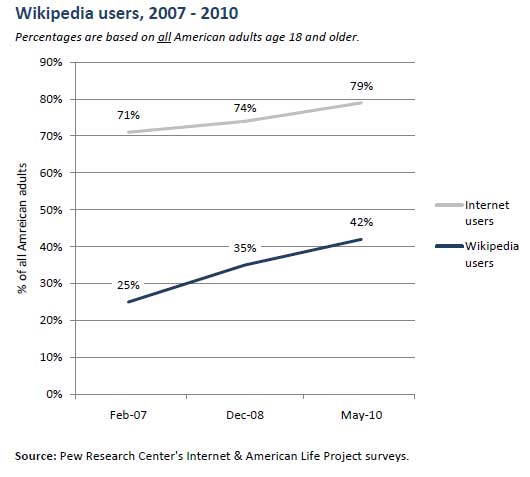 Education level is a strong predictor of Wikipedia use. The online encyclopedia is most popular among Internet users with at least a college degree, 69 percent of whom use the site. Broadband use remains another predictor, as 59% of those with home broadband use the service, compared with 26% of those who connect to the internet through dial-up.

Additionally Pew found, Wikipedia is generally more popular among those with annual household incomes of at least $50,000, as well as with young adults: 62% of internet users under the age of 30 using the service, compared with only 33% of internet users age 65 and older.

When it comes to general online activities, using Wikipedia is more popular than sending instant messages (done by 47% of internet users) or rating a product, service, or person (32%), but is less popular than using social network sites (61%) or watching videos on sites like YouTube (66%).