Why Not Everyone is a Fan of the New Facebook Groups

Some people really like Facebook’s new Groups feature. Influential tech blogger Robert Scoble could hardly praise the feature enough. He used the phrase "massively cool" more than once in his description. He’s not alone. Many are welcoming the opportunity to separate their friends into different groups and communicate in different ways with them (like chat, email lists, and integration with third-party apps).

Some are less than thrilled with the new feature, however.The feature was announced during an event based around the concept of giving users more control, but it appears that more control doesn’t necessarily mean complete control. Jason Calacanis, for example, found out the hard way that anyone can be added to a group, regardless of whether or not they actually opted in (hat tip to Matthew Ingram). The group creator has the ability to make the group open, closed, or secret.

Calacanis found out he was added to a Facebook group for NAMBLA (the North American Man-Boy Love Association), along with TechCrunch founder Michael Arrington. At Calacanis.com, Jason posted an email he sent to Facebook informing them of what happened. He closed with, "If you guys want to run these new features by me before you launch them, I can probably save you from a couple of privacy law suits each year."

This is really the kind of thing you would think Facebook would want to avoid after all of the privacy brouhaha earlier this year. Of course not everyone is going to have people adding them to questionable groups, but if it can be done, some people just aren’t going to be comfortable with it.

It’s not much different from tagging in Facebook Photos, a feature that I’ve frankly had issues with myself. It’s nice that anyone can tag you in a photo and have that show up first thing in the photos on your profile isn’t it? Groups adds that extra layer of association though, which some my find even more objectionable, as with Calacanis’ case. With this kind of functionality, people could be made to look like they’re Nazis, KKK members, pedophiles, Justin Bieber fans, or anything else.  Granted, users can report groups to Facebok: 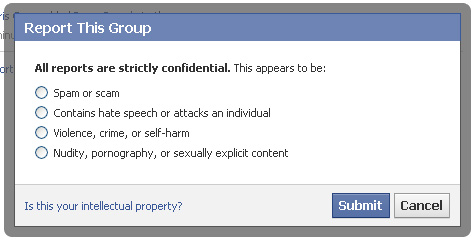 I can definitely see the feature being abused for politics. It’s probably already happening.

The feature does appear to only let you add people who you are friends with to Groups, so you may want to choose your friends carefully. It may not be a good idea to be friends with just anybody, and if you are, at least keep up with your notifications. You will be notified when you’ve been added to a group.

The email feature has received some criticism as well. If you are added to a group and you don’t keep up with your notifications, you may find your inbox getting filled up by people in that group posting things. You can put an end to this by opting out, but some feel you should have to opt in to this feature to begin with.

What do you think of the new Facebook Groups? Let us know.

Google Testing a Feature with Major Implications for Clickthroughs