Recently, Kenneth Cole took a bit of criticism in the social media space for making what many considered an insensitive tweet. I’m going to disagree with the social media guru’s here and say it’s ok to offend people. In fact, it’s probably something you should do on a regular basis. In case you missed it, here’s the tweet in question

First off, it’s pretty obvious the tweet was a joke. Done in poor taste … maybe … but it was still a joke. If you didn’t get that it was joke, then there are bigger issues you need to confront. But back to the point of this post, is it OK to offend people who might turn into potential customers … I say yes.

IMHO if you try to be the company or person that everyone likes and never offends anyone, chances are you will make a lot of compromises and end up with a mediocre product that is undistinctive and unremarkable. In short, you will have no point of differentiation. There’s nothing that makes you unique or  memorable in anyway. The second point is that not everyone is your customer. The more you tailor your product to specific customers, the more those customers will love you. 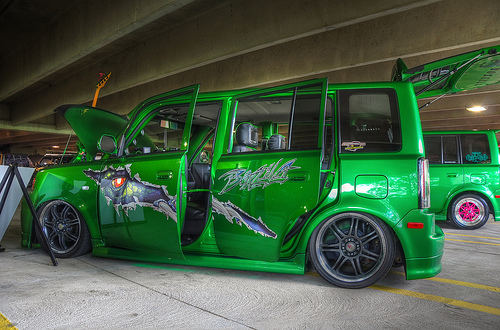 Take for example the Scion above. It’s boxy and lacks the streamlining of most modern cars and sports cars. It’s low to the ground so doesn’t appeal to the SUV soccer MOM demographic. This car isn’t made for everyone. It is made for a specific customer, a customer who likes this style and look. They like it so much, in fact, they create communities and groups where they can show off their custom modified versions, like the one pictured above. I think it’s ugly … and I realize I’m not the customer, but I am glad they are making them. Let’s be honest: presenting a Camry to the Toyota board of directors is a safe move; presenting a Scion takes some nerve.

When you build websites or other online community, you should look for ways to be more discriminating and distinctive. When you create places filled with information that people like or are passionate about, you become a destination they seek out, instead of a destination dependent on drive by search engine traffic. If people like you enough to go out of their way to visit you, you don’t have to worry about things like the death of RSS. If you don’t think being unique inspires feelings of loyalty and love then I suggest reading a recent post by OK Cupid on what makes people beautiful. It’s a fascinating piece.