Which Will Be More Critical to Marketing: iPhone or Android?

While there are other mobile operating systems that shouldn’t be ignored (Blackberry for one), there are two that seem to get the most attention, and that may end up competing most for user and marketer attention above the rest in the foreseeable future. These are of course the iPhone OS and the Android OS.

Which will you place more focus on: iPhone or Android? Let us know.

Obviously the iPhone OS runs on iPhones, and now on iPads. These are very popular devices, but in the smartphone market Android is gaining a great deal of ground, and in the tablet market, Android hasn’t really arrived yet, but it is expected to soon.

At Google I/O last month, Google announced that Android activations had passed 100,000 a day. Also last month, a report from the NPD Group found that in the first quarter of 2010, Android devices actually outsold iPhones in the U.S. The legitimacy of this has been disputed, but I don’t think anyone’s disputed the fact that Android use is gaining significant momentum.

A recent study from Retevo found that over half of consumers surveyed would buy an Android tablet over an iPad if it were cheaper. $100 Android Tablets are expected to arrive this year. Now that’s not to say that this version of the Android tablet would be the iPad killer. You have to consider that Android will likely be implemented across a wide range of devices, as opposed to the iPhone OS, which will operate on Apple’s devices.

One reason Android has been able to grow so much in the smartphone market because of pricing deals. For example, Verizon has offered buy-one-get-one-free deals on Android phones. The tablet market could see a similar scenario – pricing playing a major role. 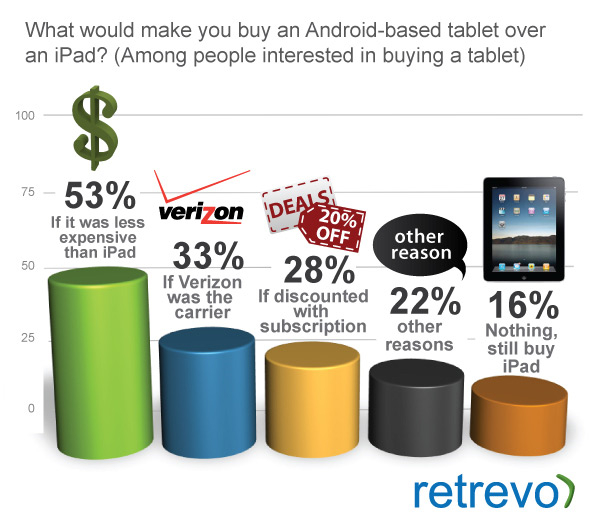 Google TV – Will It Be a Real Edge?

At Google I/O Google unveiled Google TV, a platform that merges the web experience with the television experience. Launch partners include Adobe, Intel, Sony, Logitech, Best Buy, and Dish Network. Sony will sell TVs and Blu-ray players which come with the platform. Logitech will make set-top boxes, and Dish Network will provide its customers with it.

This week, Apple CEO Steve Jobs implied that it is destined to fail, mainly talking about the lack of success of set-top boxes in general and the lack of nationwide cable services as the main barriers. However, Dish Network is nationwide, and is making moves that could net the company more customers away from competitors, even before Google TV arrives this fall. That could mean good things for Google TV.

Not To Take Anything Away from iPhone OS

None of this is to discount the importance of reaching Apple’s users. They are consumers too, and there are a lot of them. However, when resources are limited, businesses may have to do some prioritizing. Ideally, you want to get in front of as many potential customers as possible. It just looks like at this point, that Google is positioning itself to get Android in front of  a whole lot of people. But still, a lot of this is forward looking.

1. If you can find an angle that makes sense for your business, and you can afford the resources, develop mobile apps for mobile platforms.

2. Regardless of whether or not you have your own apps, look for ways that you can get be found in other mobile apps.

3. Look at the most popular apps and find angles for how your business can take advantage of some of them.

4. There may be a great deal of creativity involved in finding the right angles, but there are so many apps out there already (and the number will continue to grow rapidly), there will continue to be more unique and innovative opportunities. Just explore them. By the way, Google is putting apps directly in its mobile search results now for both Android and iPhone users.

5. Advertise. There is also a growing number of mobile advertising opportunities, including various forms of in-app advertising. Watch for Google to offer more interesting formats, now that it has acquired AdMob and Invite Media.

"What’s important for marketers to realize is that it’s a similar redux of the Mac PC wars in the 80s/90s where Apple puts out a great product but constrains the market with its controls & dictation while Android with its openness & no licensing costs allows it to flurish," Michael Martin, who founded GoogleAndBlog (often cited as a top Android site), and currently runs Mobile Martin tells WebProNews. "Case in point, the iPhone is self constrained to AT&T for some time while Android is available on all 4 major US mobile providers as well [as] pre-paid service Cricket along with 50+ other carriers around the world amounting to over 100,000 activations per day – this provides greater marketshare."

He continues, "Next is mindshare, which for smartphones is predominantly based on the quality and number of applications (as welll device specs & usability)…While Apple allienates developers with its cryptic & arbitrary acceptance rules for the App Store which people had to bite their lip to endure due to both marketshare & mindshare, they are relieved of this with OPTIONS that include the Android Market while they are FREE to provide their applications through other venues."

"So marketers can see the tide is turning while also saving costs. If developing apps, with a cheaper Android programmer in Java vs a more expensive iPhone developer in C as well, there are now tools from Ansca & Rhomobile that allow cross mobile application development with one click instead of recoding for iPhone, iPad, Android, BlackBerry, Symbian, Palm."

Do you think Android will be a critical platform for reaching consumers? How about compared to the iPhone? Tell us what you think.

Is Google TV Destined to Fail? Businesses Should Hope Not.