Verizon may soon be following in the footsteps of AT&T with a tiered pricing plan. Bloomberg interviewed Verizon Communications CFO John Killian, who told them they’d "probably need to change the design of our pricing where it will not be [a] totally unlimited, flat rate." There were mixed feelings about this when AT&T did it, with a large amount of negative opinion. Verizon will no doubt face a similar uproar.

Chitika Research has shared some findings looking at Android distribution by Handset. The Motorola Droid is the most popular Android handset "by far" according to the firm. 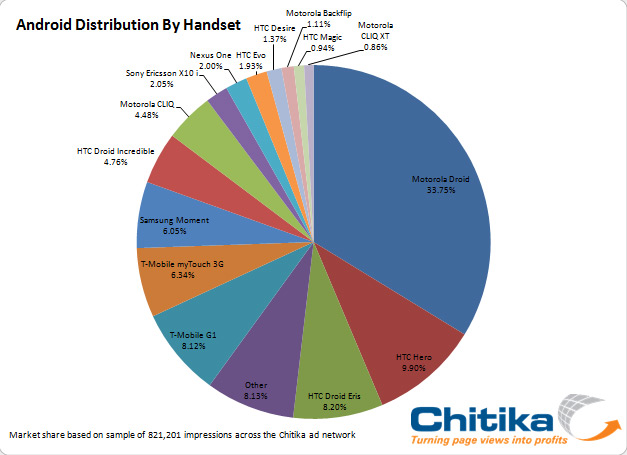 Speaking of Droids, popular gadget blog Gizmodo has shared some first impressions of the Droid 2 from a reader who was able to get his hands on one. According to this reader, it may not be actually called the Droid 2, but it is the successor to the Droid.

Apple’s release of the new MobileMe Mail is the subject of a great deal of discussion throughout the Blogosphere. More on that here.

Nokia announced that all of its phones in 2011 will come with NFC (Near Field Communication), which can be used to turn devices into transportation tickets, debit cards, and house keys. Should be interesting for Nokia sales. According to TheStreet.com, Apple may have some suppy-and-demand issues with the recently announced iPhone 4, citing a production problem with display screens holding up the whole process.

Digitimes (via BoyGenius)reports that Apple is shipping 1.2 million iPads per month. Here are some stats Steve Jobs reported at Apple’s recent Worldwide Developer Conference (where the iPhone 4 was officially unveiled).

Can You Get More Links if You Turn Off Comments?