The rate of global software piracy rose to 43 percent in 2009, a two percent increase from 2008 driven primarily by expanding PC sales in emerging markets, according to the seventh annual Business Software Alliance/IDC Global Software Piracy Study.

"Software theft exceeded $51 billion in commercial value in 2009. The public and private sectors need to join forces to more effectively combat an epidemic that stifles innovation and impairs economies on a global scale," said BSA President and CEO Robert Holleyman.

A 43 percent piracy rate means that for every $100 worth of legitimate software sold in 2009, an additional $75 worth of unlicensed software also made its way into the market. 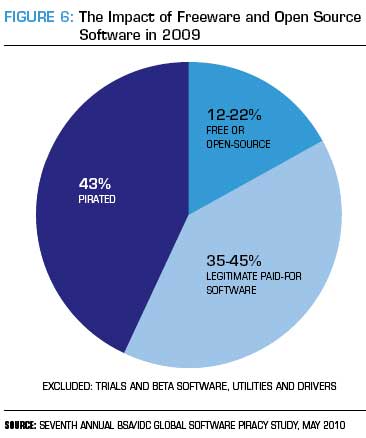 "Software theft hurts not just software companies and the IT sector, but also the broader economy at the local, regional and global levels by cutting out service and distribution firms," said John Gantz, chief research officer at IDC.

"Lowering software piracy by just 10 percentage points during the next four years would create nearly 500,000 new jobs and pump $140 billion into ailing economies."

In the United States, software piracy remained at 20 percent, the lowest level of software theft of any nation in the world. The study noted that given the size of the PC market, the commercial value of pirated software in the United States was $8.4 billion in 2009.

*The factors driving up the global piracy rate include growth in the consumer PC base and in emerging markets – both segments with high piracy rates:

*The PC markets in Brazil, India and China accounted for 86 percent of the growth in PC shipments worldwide.

*For every dollar of legitimate software sold, another $3-4 in revenue is created for local firms.

*China saw the largest increase in the commercial value of pirated software of any country – growing $900 million to $7.6 billion.

*India, Chile and Canada each saw the greatest improvement in reducing software theft, each achieving a 3 percentage point decline in their piracy rates in 2009.

"Given the economy, 2009 piracy rates are better than we expected. But incremental improvements are not enough. Few if any industries could withstand the theft of $51 billion worth of their products. To foster innovation and maximize the economic impact of the IT industry, governments must act – particularly those in fast-growing, high-piracy countries," said Holleyman.

Get Ready to See More Cool Things Based on Google Moderator