Yesterday, we told you about Twitter development team member Ryan Sarver’s message to third-party client developers.  In this message he stated that it was Twitter’s goal to create a uniform experience for users, and many non-official clients were preventing that from happening.  He also explained that most users access twitter through official clients, quoting a statistic that showed that figure to be 90%.

Well, it seems social media company Sysomos took issue with that last part.  They decided to crunch their own numbers and came up with a entirely different picture of the Twitter landscape.  Sysomos took a large sample of tweets (25 million) made on the day that Twitter’s API rules were officially updated.  What they found was that 42% of those tweets were made through non-official clients; a staggering break from Sarver’s number of around 10%.

Here is Sysomos’ breakdown of those 25 million tweets: 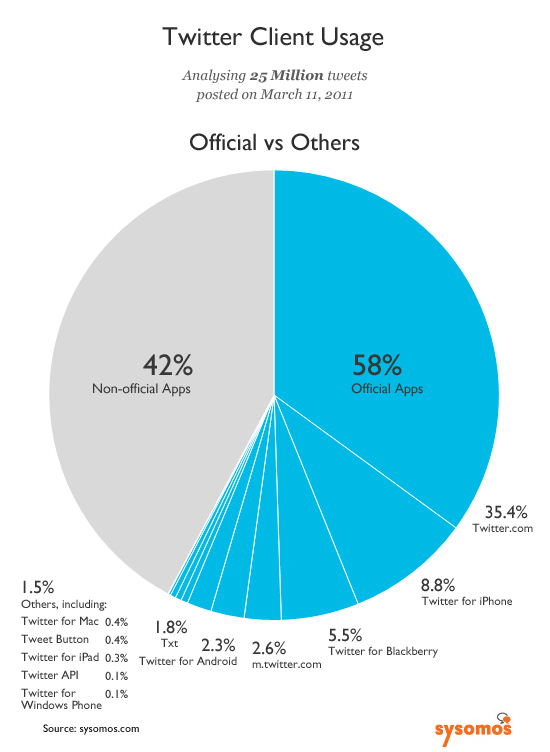 And here is a breakdown of individual clients’ share of the non-official pie: 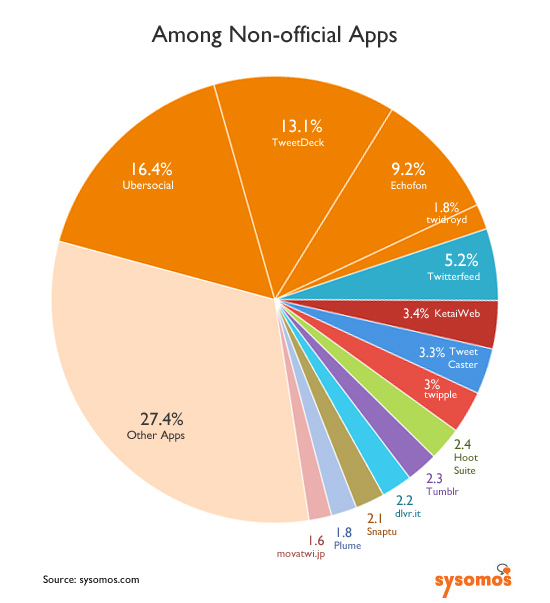 The gigantic discrepancy can be explained quite easily, according to Sysomos: “Twitter’s number focus on the total number of user’s while our analysis looked at total tweets. It means there may be many Twitter ‘official’ users who are not very active.”

While this explanation is simple, it is still alarming for Twitter.  It seems the truly Twitter-happy are tweeting more and more with third-party clients and many official client users are stagnant.  Other possibilities are that people are reading tweets through official clients but prefer actually tweeting themselves through other clients.  Maybe some people are spreading their Twitter love around and using multiple clients.  Either way, if clients like Ubersocial and Tweetdeck continue to remain so popular, Twitter will have a hard time promoting the uniform experience that Sarver said was so important.