Smartphone adoption in the EU5 (U.K., France, Germany, Spain, Italy) has grown 32 percent compared to a year ago to 51.6 million subscribers, according to a new report from comScore.

Growth can bee seen across the range of monthly subscription fees, but the mid to low tier is growing faster that high tier subscriptions in each of the EU5 markets. 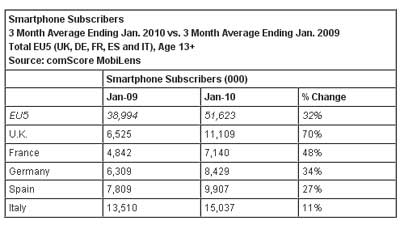 "Smartphones are generally seen as luxury devices that come with big price tags and high monthly tariffs, yet the largest segment of the market and the one demonstrating greatest momentum is actually the low to mid tier," says Alistair Hill, senior mobile analyst at

"The growth in these tiers suggests that as smartphones become more affordable to the majority of European consumers, their proliferation will increase considerably and lead to a surge in mobile content and data consumption. Such market dynamics offer substantial opportunity for different players in the mobile ecosystem — from operators and manufacturers to publishers and advertisers — and underscore the importance of competing for customers now to engender long-term loyalty."

Asus To Take On iPad With Google OS