A quarter of children in the UK aged 8-12 who use the Internet at home say they have a profile on Facebook, Bebo or MySpace, although the minimum age is 13, according to new research from communications regulator Ofcom. 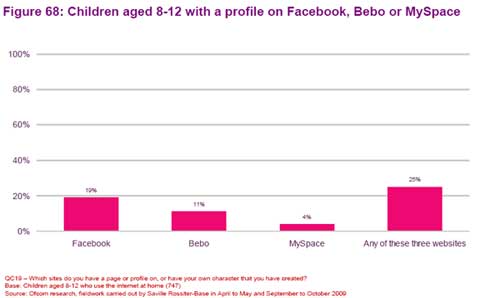 Blogs or sites like Wikipedia where users can add or change information are visited by 18 percent of those aged 8-11 and almost half of those 12-15 (48%). Users of these sites aged 8-11 are much more likely than 12-15 to believe that the information on these types of sites is all or mostly true (70 per cent vs. 48 per cent) with boys aged 8-15 more likely than girls of this age to believe that all or most of the information is true (59 per cent vs. 46 per cent).

Two in five users of social networking sites aged 8-11 and 12-15 also believe that all or most of the information on these sites is true (38% and 40% respectively). One in four aged 12-15 (27%) who use search engines think that they only return results from websites with truthful information.

When Personalized Search and Relevance Collide