Twitter to Get More Useful in Time for Monetization?

Twitter engineer Alex Payne tweeted over the weekend, "If you had some of the nifty site features that we Twitter employees have, you might not want to use a desktop client. (You will soon.)" Some took that to mean that Twitter was working on some new features for its own site, that would essentially render some popular third-party clients all but obsolete. The question is whether this is a legitimate concern for developers, or it has just been blown out of proportion. It could possibly be a combination of the two.

Technology blog TechCrunch took the tweet and ran with it, speculating that Twitter "appears to be on the verge of some big changes," and noting that the company recently hired a new "UI guru" (that’s User Interface) from LinkedIn. Following this story, Payne quickly reacted through his Twitter account, downplaying the threat to third-party developers, saying things like, "I just mean that our web client team is building cool stuff. It’s going to inspire desktop app developers. Same data, new perspectives," and "It’s all stuff that’s available in the API, just a different view of it." He also retweeted more than one tweet mocking TechCrunch’s reaction, such as this one from another Twitter employee: 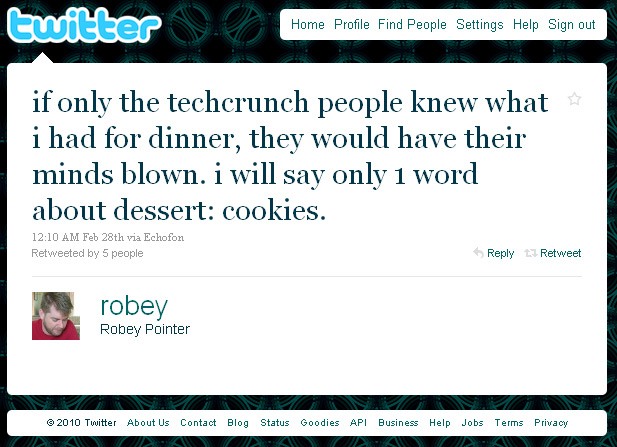 Still, TechCrunch’s MG Siegler may not be completely off base. Just because Twitter isn’t taking anything away from developers, doesn’t necessarily mean that users of certain third-party apps won’t just as soon use Twitter.com instead, when the features they enjoy start being integrated there. If nothing else, such features could keep new users from worrying about looking for apps that do these things, because their needs will already be filled.

That’s not to say Twitter would be wrong for doing so. User retention has been a problem for the company in the past, and anything that makes Twitter more usable has to be good for usage. Twitter is expected to announce its new ad platform/monetization model this month (finally), and while nobody knows exactly how that’s going to shake out yet, it’s likely in Twitter’s best interest to have users going through Twitter itself.

Twitter has not been shy in the past about taking ideas that were born from the community, and integrating them into Twitter.com (the retweet feature comes to mind). The much larger Facebook has certainly been happy to borrow ideas from Twitter, so if Twitter wants to secure a stable future in this social networking/microblogging space, it is going to help if it looks at the ways users use the service through third-party apps, and utilizes some of these functionalities on its own.

As far as the developers are concerned, the more ideas Twitter takes for itself, the more innovating developers are going to have to do to keep their own apps relevant, and that can only be good for the Twitter community at large.

On a sidenote, Payne’s original tweet on the matter appears to have been deleted (the URL linked to by Siegler, now goes to a "sorry that page doesn’t exist!" page).  Update: Twitter does apparently have some missing tweet issues going on, so perhaps that is related.