Twitter is testing a new home page, aimed at showing more of the information that "flows through Twitter."

"This builds on a series of changes starting last year when we redesigned the homepage to make search and trending topics more visible and easily accessible to everyone," says Twitter Designer Doug Bowman. "With that version, we brought the power of search.twitter.com to the homepage and let people explore the value of Twitter without an account." 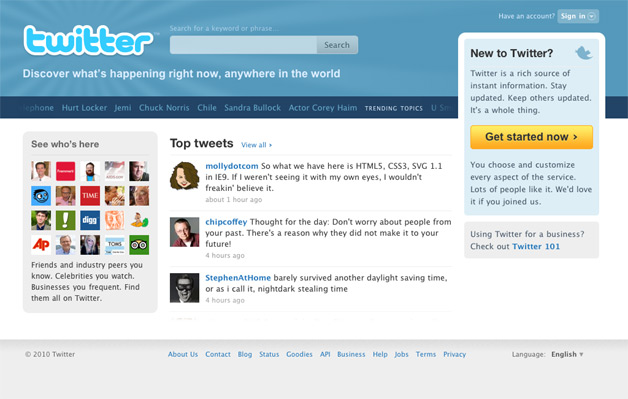 Include on the new home page are:

"All of our recent changes embrace the notion that Twitter is not just for status updates anymore," says Bowman. "It’s a network where information is exchanged and consumed at a rapid clip every second of the day. With so much being shared, we know that there’s something of value for everyone. People who internalize the value of Twitter understand the power of this simple medium. But it hasn’t been easy to make that value transparent or obvious for curious folks coming to Twitter for the first time."

That has indeed been an issue Twitter has faced in the entire time of its existence. People are embracing it more than ever, but this could help the newcomers get more out of the service.

Analyst Bets Apple Search Engine Might Be On The Way