There are some interesting things going on with Twitter this week, and while they may not be as sexy as Facebook’s news, they could have a pretty big impact on the way Twitter is used by developers and marketers.

The "Halfhose" will be comprised of 50% of Twitter’s full firehose, and according to Marshall Kirkpatrick at ReadWriteWeb, who interviewed Gnip CEO Jud Valeski, the price will be $360,000 a year. The "Decahose" is comprised of 10% of the full firehose and costs a reported $60,000 a year. The "Mentionhose" provides a realtime stream of all Tweets that mention a user, including @replies and retweets. Pricing for that one is unclear.

"We expect this to be very interesting to businesses studying the conversational graph on Twitter to determine influencers, engagement, and trending content," says Valeski in the announcement.

"There’s enormous corporate demand for better monitoring and analytics tools, which help companies listen to their customers on Twitter and understand conversations about their brands and products," he says. "Twitter has partnered with Gnip to sublicense access to public Tweets, which is great news for developers interested in analyzing large amounts of this data. This partnership opens the door to developers who want to use Twitter streams to create monitoring and analytics tools for the non-display market."

Mashable’s Adam Ostrow reports that Twitter has now started inviting a select group of users to test the product. He also has a couple screenshots like the one below. 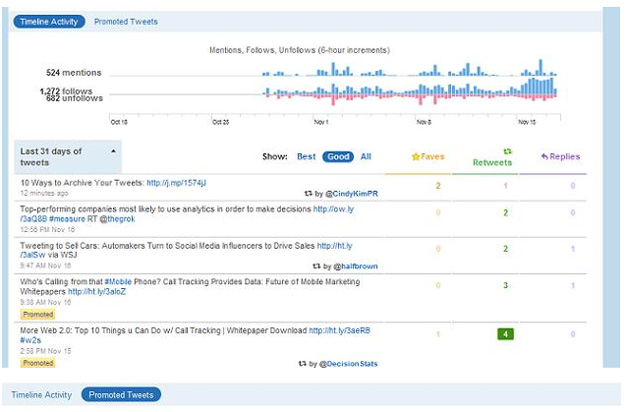 Frankly Twitter analytics are long overdue, and should ultimately solve that problem of "How do I use Twitter?" for a lot of businesses. This will help them understand what’s working and what’s not and allow them to adjust their strategies accordingly. Facebook has offered analytics for quite some time, and provides a great deal of insight into user engagement with Pages. It will be nice to have that kind of look at Twitter engagement.

Twitter co-founder Evan Williams also revealed at the Web 2.0 Summit that the company calculates a "reputation score" for all Twitter users. This is used to help determine things like which users to suggest to others. Hat tip to Jennifer Van Grove on that one.

Twitter seems to be maturing as a service, even since Williams recently handed his CEO throne over to Dick Costolo, which has allowed him to focus more on Twitter itself and Costolo to focus more on the business side of things. If these early weeks since that transition are any indication, we can probably expect a lot of useful Twitter features down the road.