Twitter’s hit another major milestone on its way to becoming an omnipresent method of communication: in May, according to new stats from Pingdom, the site oversaw the transmission of two billion tweets. 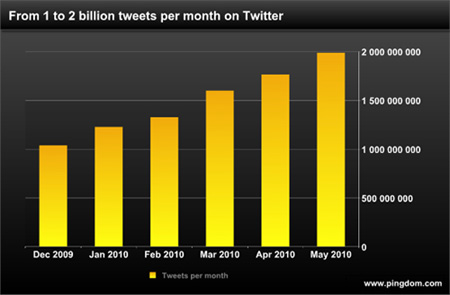 Then here’s another important point: the rate of growth is consistent.  A post on the Royal Pingdom blog even noted, "We actually called that this would happen at this exact point in time, based on a prediction we’d made for Twitter’s ‘tweet growth’ in 2010 a while back."

It follows that Pingdom’s forecast about Twitter processing 6.7 billion tweets in January of next year is still looking plausible, then.

Finally, we should note that the fail whale hasn’t shown itself in recent days, and complaints about spam don’t seem to be proliferating, either, meaning Twitter’s growth doesn’t appear to be having any undesirable side effects.  That’s more or less the best scenario anyone could have hoped for.