Definitely the richest, and most likely the most hated dog in the world is dead. Hotel and real estate mogul Leona Helmsley’s pampered Maltese, Trouble, has passed away at the ripe old age of 12 (or 84, depending on who you ask).

The (pretty cute) little pup became world famous when it was bequeathed 12 millions dollars in Leona Helmsley’s will. Helmsley, known as “The Queen of Mean,” died in 2007 of congestive heart failure. After her death, a judge was able to reduce the 12 million dollars to 2 million. For the last few years, the dog has been cared for by Carl Lekic, the manager of Helmsley’s Sandcastle hotel in Florida. 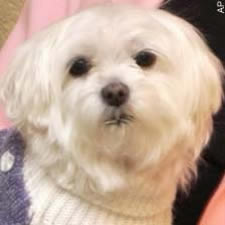 What the hell does a dog do with millions of dollars? Well, for one it pays for protection. Trouble spent $100,000 a year on a full-time security guard – one hired based on the multitude of death threats directed at the canine. I guess some people don’t take too kindly to exorbitantly rich animals. Other reported costs were $1,200 a year for food and $8,000 a year for grooming.

Although the news is just being confirmed today, Trouble apparently died last year on December 13th. Helmsley wanted the dog to be buried with her in the family mausoleum – but no dice. Trouble was cremated, as it’s against regulations to house pets in a human cemetery.

“You cannot bury pets in a cemetery,” said Stephen Byelick, a member of the Sleep Hollow Cemetery’s board. “The same rules apply to mausoleums.”

Well, if in fact all dogs do go to heaven, the two may be reunited in paradise. But then again, maybe not as I’m sure some would debate which side of the coin Leona Helmsley fell upon.

Here’s a couple of the Twitter funnies about the death of the luckiest dog in the world:

@kkennedyAP
kelli kennedyIt really is true. Everyone comes to Florida to die, even Leona Helmsley’s dog Trouble that she left $2 million to
http://t.co/8Dxehgf

17 minutes ago via web · powered by @socialditto

@DailyDeathClick
Death ClicksTrouble the millionaire died back in December & we only hear of it now? Fishy. http://bit.ly/igrhGL

35 minutes ago via TweetDeck · powered by @socialditto

@rpattersonlaw
Richard Patterson JrUnless Some Bitch Comes Out of the Woodwork: Charity trust gets the money after Leona Helmsley’s millionaire dog dies http://usat.ly/jZDkaF

48 minutes ago via HootSuite · powered by @socialditto

That’s right, folks. Trouble didn’t leave any other pet or favorite chew toy anything. Whatever money is left from the original amount bequeathed will go into a charity trust. I hope Trouble didn’t blow it all MC Hammer style.

Finally, this Twitter user sums up the fascination with a story like this – It’s the absolute absurdity of the whole thing.