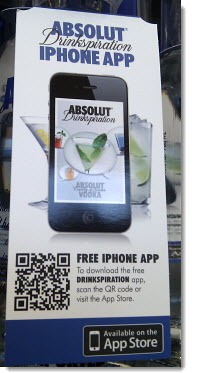 QR codes are appearing with increasing frequency in a growing range of marketing and communication activities. I’ve been paying attention to who’s using these two-dimensional barcodes and how in their marketing when I’m out and about, especially in supermarkets, taking pictures when I encounter something interesting and adding some to the QR codes in the wild group on Flickr.

Others are doing the same – here’s a great example from Kris Hoet on what AXA Bank is doing – and adding images and commentary on what they’re encountering.

Notwithstanding these great examples, QR codes are still very much early adopter territory, certainly in Europe and I suspect in the US also, even if they were ubiquitous at the 2011 SxSW Interactive conference and expo recently in Austin, Texas.

SxSW is a good indicator, though, of tech that could be imminently mainstream (Twitter being a good example).

Yet it seems to me that there’s a fundamental hurdle still to jump before QR codes realize their potential for consumers to use them easily and so for them to really enter the mainstream. That hurdle isn’t a creative one (there are plenty of good examples of using QR codes as my small selection suggests) or even a technical one: creating a QR code really is simple.

It’s more of a usability one – when you encounter a code, what do you do? How do you scan it? With your mobile device’s camera? Even if you have a device with a camera, smartphone or any other type, that doesn’t work – you need a barcode scanning app installed on your device.

In his post How Effective Are QR Codes Anyway? at RWW the other day, John Paul Titlow nails it:

[…] Perhaps the biggest obstacle to their widespread adoption is simply the fact that most people don’t own smartphones. Of those that do, they may or may not know what a QR code is or how to use it. […] Until QR code readers come built-in natively on a majority of smart phones and those devices are being carried around by a majority of consumers, the technology probably won’t have an enormous impact. In the meantime, they appear to be headed for ubiquity. It’s just a matter of time.

Agree with that conclusion but it may be a while until devices have such apps built-in. I can see better opportunities for marketers, such as this example from UK retailer Debenhams who recently launched a shopping app for Android devices that includes a barcode reader. (I tried it: it has problems with QR codes but works with normal barcodes – that may be fine for Debenhams but not good for promoting use of QR codes.)

Hurdles still to jump, therefore: easy for early adopters but will likely seem too high for now for your average consumer.