States that have laws banning texting while driving are not seeing a reduction in the number of accidents, according to a new study by the Highway Loss Data Institute (HLDI).

In fact, such bans are associated with a slight increase in the frequency of insurance claims filed under collision coverage for damage to vehicles in crashes. This finding is based on comparisons of claims in 4 states before and after texting ban, compared with patterns of claims in nearby states.

HLDI researchers calculated rates of collision claims for vehicles up to 9 years old during the months immediately before and after driver texting was banned in California (January 2009), Louisiana (July 2008), Minnesota (August 2008), and Washington (January 2008). 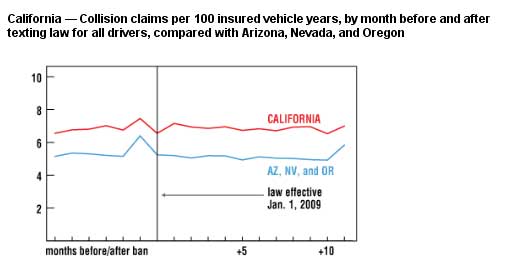 “Texting bans haven’t reduced crashes at all. In a perverse twist, crashes increased in 3 of the 4 states we studied after bans were enacted,” said Adrian Lund, president of both HLDI and the Insurance Institute for Highway Safety.

“It’s an indication that texting bans might even increase the risk of texting for drivers who continue to do so despite the laws."

Month-to-month fluctuations in the rates of collision claims in HLDI’s 4 study states with texting bans for all drivers didn’t change much from before to after the bans were enacted. Neither did the patterns differ much from those in nearby states that didn’t ban texting for all drivers during the study period. To the extent that the crash patterns did change in the study states, they went up, not down, after the bans took effect. Increases varied from 1 percent more crashes in Washington to about 9 percent more in Minnesota.

Not surprisingly, young drivers are more likely than older people to text while driving. In all 4 of the study states, crashes increased among drivers younger than 25 after the all-driver bans took effect. In California, Louisiana, and Washington, the increases for young drivers were greater than for drivers 25 and older. The largest crash increase of all (12 percent) following enactment of a texting ban was among young drivers in California.

Noncompliance is a likely reason texting bans aren’t reducing crashes. Survey results indicate that many drivers, especially younger ones, shrug off these bans. Among 18-24 year-olds, the group most likely to text, 45 percent reported doing so anyway in states that bar all drivers from texting. This is just shy of the 48 percent of drivers who reported texting in states without bans. Many respondents who knew it was illegal to text said they didn’t think police were strongly enforcing the bans.

"But this doesn’t explain why crashes increased after texting bans," Lund points out.

"If drivers were disregarding the bans, then the crash patterns should have remained steady. So clearly drivers did respond to the bans somehow, and what they might have been doing was moving their phones down and out of sight when they texted, in recognition that what they were doing was illegal. This could exacerbate the risk of texting by taking drivers’ eyes further from the road and for a longer time."