If it hasn’t already done so, Twitter may soon need to hire a few translators.  This afternoon, the stats experts at Pingdom took a look at how the site is doing on an international basis, and it seems that Twitter’s rate of growth has become rather high in about a dozen different countries.

Argentina, Brazil, Colombia, Mexico, and Venezuela stood out as nations in Latin America in which Twitter’s seeing traffic rates quickly increase.  A post on the Royal Pingdom blog also noted, "These are not small countries.  Together, they have almost 150 million Internet users that Twitter can potentially tap into." 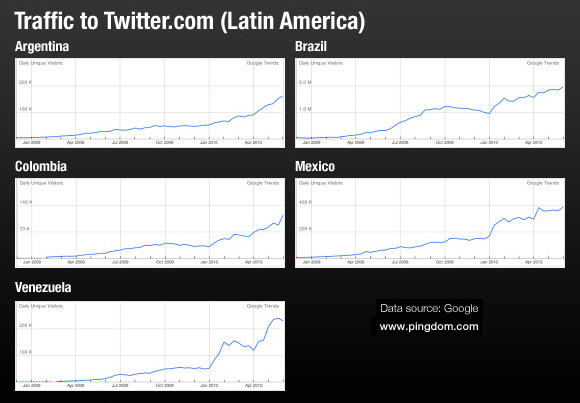 Then in Asia, similar patterns are starting to emerge in India, Japan, South Korea, and Taiwan, and Pingdom’s bloggers put the combined number of Internet users in those countries at 230 million.

Finally, significant increases in Twitter’s popularity have been recorded in Italy, Russia, and Spain, as well, which together account for about 104 million Internet users.

Twitter’s reputation should improve if it can access even a fraction of these individuals (it’ll seem less like a Silicon Valley phenomenon), and international growth should help the site reach many new advertisers, too.

Unfortunately, a larger user base may also result in more appearances on the fail whale’s part (consider how the World Cup’s gone so far for Twitter), but the rising unique visitor stats already imply that most people don’t mind.