Stats Put Android Ahead Of iPhone In Eight States

There’s encouraging news for Google in the Android vs. iPhone war.  A company that’s delivered more than one billion applications, games, ringtones, videos, and wallpapers to mobile users claims Android has topped the iPhone in terms of user concentration in eight states.

As the map below shows, these eight states are Arizona, Maryland, Montana, Nebraska, New Mexico, North Dakota, South Dakota, and Wyoming.  Then another five states are considered swing states, leaving the last 37 under Apple’s control. 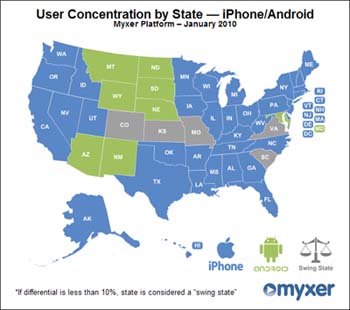 Obviously, these findings don’t represent a true victory for Google even if they’re absolute facts.  The states associated with Android aren’t all chockfull of people, and eight to 37 isn’t a good ratio.  Apple fans are sure to point out that Myxer is relatively new to the stats game, as well.

Still, the data indicates that Android’s gained a lot of ground within a certain sample group, and that it’s done so at a more than reasonable pace.  What’s more, Myxer’s promised to update the map every quarter, meaning we’ll get a better idea of how things are trending as time goes by.

According to Myxer, "A total of one million unique users from both the Android and iPhone operating systems were used to make this comparison."