SAMCRO is almost back, and if you’re not excited then I don’t know what excites you.

FX has been hitting it out of the ballpark lately – with Louis C.K.’s amazing show Louie in its second season, the long-running Rescue Me in the middle of its final season, and even new comedy Wilfred making me laugh more than I thought it would. Sons of Anarchy is no exception.

In the time between Season 3’s mind-blowingly awesome ending and Season 4, set to premiere on Tuesday, September 6th at 10 EST, we’ve been provided with a little bit of SOA entertainment. Show creator Kurt Sutter went on an amazing Twitter rampage following some (unforgivable) Emmy snubs. There, he called out Glee as well as the Academy’s old age. If you missed it, please take some time to catch up – I promise it is well worth your time.

But now, as we are less than a month away from the premiere, a new promo has dropped giving us the first footage from Season 4. Check it out –

Want an even more in-depth Sons of Anarchy experience? Check out the recently updated iOS app that’s new for Season 4. [Spoiler lurks ahead]

Included in the updated version, three additional scenes, shot exclusively for the app. These three scenes will provide a glimpse of life both in the Stockton prison where many SAMCRO members have been incarcerated for the past 14 months and of life back home in Charming. Using genre-bending ways of telling the story, the app illustrates some of what has come to pass in the time lapse, leading up to the season four launch on FX, Tuesday, September 6.

The SOA app is updated every Monday and Wednesday with new storyboard “appisodes” and deleted scenes. 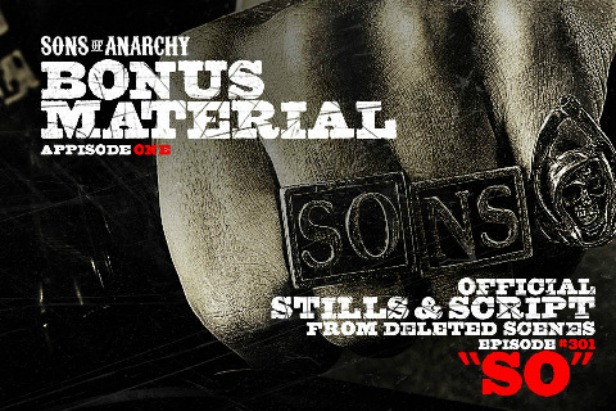 Right now it is only available on iOS, but it will be available to Android users on September 2nd.

5 hours ago via TweetDeck · powered by @socialditto

@CS_X_
Cody Springer@Kateylous love your character in #SOAFX cannot wait to see you and the cast in Season 4. 🙂

1 hour ago via txt · powered by @socialditto

Yesterday on a blog post entitled Halfway, creator Kurt Sutter explained that the goal for the show is a 7-season arc –

It was brought to my attention the other day that if we get the luxury of playing out our seven season arc, we are halfway to completing that task.

What are your expectations for Season 4? Let us know in the comments.

Should Bert & Ernie Get Married? Online Petition Thinks So [UPDATE]

Demand Media Up, AOL Down