Is Blogging Really in Danger Because of Social Networks?

Here we go again with another one of those silly social media vs. blogs debates. The New York Times stirred the pot this time with an article called, "Blogs Wane as the Young Drift to Sites Like Twitter."

Can you imagine ever reading only social media updates and no blogs? Share your thoughts.

"Blogs were once the outlet of choice for people who wanted to express themselves online. But with the rise of sites like Facebook and Twitter," writes Verne G. Kopytoff. "They are losing their allure for many people — particularly the younger generation."

WebProNewsIs blogging on the decline thanks to social networks?17 hours ago 4 likes 12 comments

This idea that blogs are dying has been around practically as long as either Facebook or Twitter, and it almost always gets dismissed as a ridiculous notion.

WordPress founding developer Matt Mullenweg took some issue with the piece: "The title was probably written by an editor, not the author, because as soon as the article gets past the two token teenagers who tumble and Facebook instead of blogging, the stats show all the major blogging services growing — even Blogger whose global ‘unique visitors rose 9 percent, to 323 million,’ meaning it grew about 6 Foursquares last year alone. (In the same timeframe WordPress.com grew about 80 million uniques according to Quantcast.)"

The New York Times itself even has a whole directory of blogs: 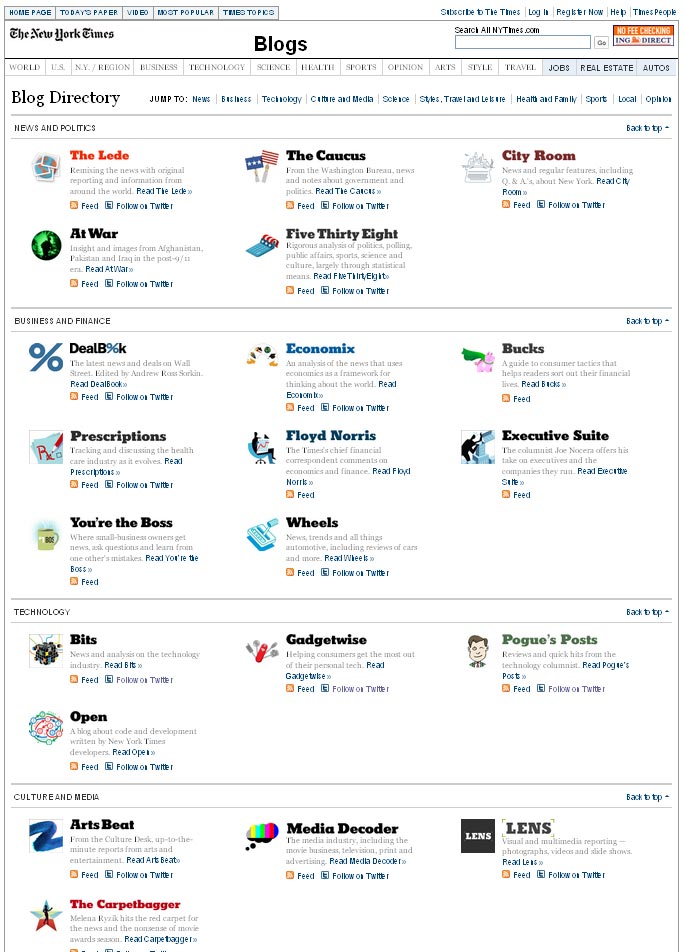 "Blogging has legs — it’s been growing now for more than a decade, but it’s not a ‘new thing’ anymore," says Mullenweg. "Underneath the data in the article there’s an interesting super-trend that the Times misses: people of all ages are becoming more and more comfortable publishing online."

Major web content forces like AOL and Demand Media recognize the power of blogs. AOL is buying them, and Demand recently launched a blog syndication program.

Kopytoff does make a critical point, however. The lines aren’t always crystal clear about what is truly "blogging" and what isn’t. Even Twitter use is often called "microblogging".

"The blurring of lines is readily apparent among users of Tumblr," says Kopytoff. "Although Tumblr calls itself a blogging service, many of its users are unaware of the description and do not consider themselves bloggers — raising the possibility that the decline in blogging by the younger generation is merely a semantic issue."

People blog on Facebook all the time too. They call them "notes". No matter where it’s happening, blogging is not going away. You can call it what you want, but people will continue to put their thoughts into words and publish them online. Sometimes, they’ll even do it in more than 140 characters. Some people even think Twitter should expand their character limit.