Report: State Dept. Official May Go To Work For Google

A State Department official who’s made something of a splash due to his use of Twitter might soon begin collecting paychecks from Google, according to a new report.  Jared Cohen would supposedly assume a "strategic policy role" at the company. 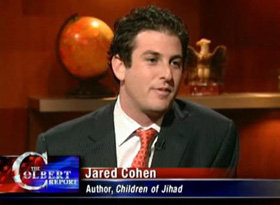 Cohen has an interesting track record.  He’s received degrees from Stanford and Oxford, authored several books, and according to his State Department bio, focuses on counter-terrorism, the Middle East, and youth issues, among other things.

Cohen is also the person responsible for asking Twitter to delay its maintenance when Iranian protesters were using the service.  And for better or worse, the New York Times reported that he’s one of two officials who "raised hackles on Capitol Hill" and "embarrassed the State Department" with informal tweets during a trip to Syria.

(Their biggest misstep was probably mentioning that Cohen challenged the Minister of Telecom to a cake-eating contest, if you’re curious.)

Anyway, back to the Google-related rumor.  Kara Swisher spoke to "sources close to the situation" and reported afterward, "Cohen has been in discussions with Google in recent months about going there, those sources said, although it is not a done deal."

Cohen would no doubt be a considerable asset to Google.  The company will just have to consider whether hiring him (assuming he’s agreeable to the move) might cause it to receive even more attention from antitrust regulators.

Firefox Will Let You Get More Organized with "Tab Candy" Feature