To a person with poor eyesight, Yahoo, Bing, and just about every other organization trying to compete in the mobile search market might as well not exist.  New stats indicate that Google has an overwhelming lead, allowing it to dwarf competitors by comparison.

The graph below, which was constructed by Pingdom’s bloggers using data from StatCounter, pretty much speaks for itself.  The bars corresponding to the mobile market shares of "Yahoo," "Bing," and "Other" just peek above the x-axis, and would be almost impossible to discern if not for the orange-on-black color scheme. 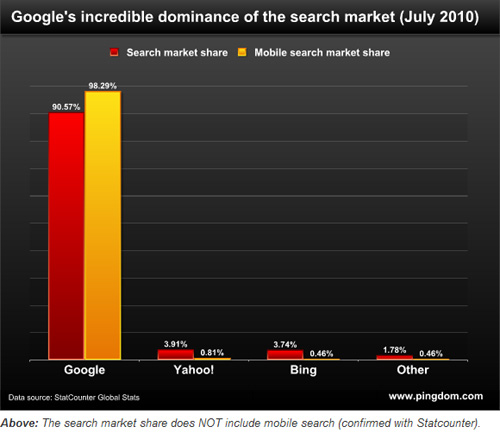 A post on the Royal Pingdom blog concluded, "If Google firmly believes that mobile is the future (which is the opinion of CEO Eric Schmidt), they are making all the right moves."

Indeed, according to StatCounter’s records, "One year ago, [Google’s] share of the mobile search market was 95.58%.  That’s significantly less than today’s 98.29%.  Who knows, in a few months, perhaps they will pass 99%.  At this point this actually seems plausible."

But it should also be interesting to see if the launch of the Windows 7 Phone mobile operating system is able to in any way affect Google’s dominance.  Bing is supposed to be the sole default search option, after all.

Microsoft – and maybe every other company trying to compete in this field – can hope, at least.