Some people use their Facebook account like another email address, logging in, checking their messages, and logging out.  Others just add a couple of friends, skim a few status updates, and call it a day.  But data from Pingdom proves that Facebook does a far better job of engaging people than other social networks.

Pingdom recently compared a number of social sites in terms of monthly page views per visitor.  Facebook blew away the competition, scoring almost twice as high as the next-closest site, Hi5.  It ranked ahead of MySpace by a margin of about 2.5 times, and proved almost ten times as engaging as Twitter. 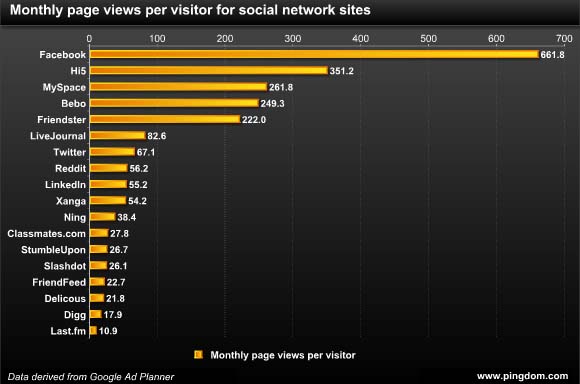 Of course, a post on the Royal Pingdom blog did highlight one potential problem with the rankings, stating, "These numbers are bound to be a bit unfair to Twitter.  Many of its users rely heavily on applications to access the site and don’t necessarily spend much time on the site itself."

Still, Facebook’s win seems pretty undeniable, and the margin of its lead is even more impressive if you consider the size of its user base (350 million people, according to an official blog post published early this morning).

Pingdom observed, "This is bound to be extremely good news for Facebook’s income from advertising."

Less Than Half Of Americans Read A Daily Newspaper