Last Saturday, when nobody actually thought that the world was coming to an end, the realm of social media was nevertheless buzzing about biblical numerologist and proven liar Harold Camping’s prediction.

When 6pm local time came and went in countries all across the world with no sign of the rapture, people took to Twitter and Facebook to convey their utter shock. Well, actually more like joke about their own survival of said fake apocalypse. But either way, people were talking.

Four days later, Media Queen Oprah Winfrey broadcast her final show to millions of fans around the world. She too drew the attention of the social sphere and search, as Yahoo reported a 56% spike in Oprah-related searches over the course of the week leading up to the finale.

Which big story do you think received the most attention from the interwebs? The nopocalypse or the Opocalypse?

If you guessed the end of the world, then you would be absolutely correct.

Social media monitoring company The Meltwater Group has sent us a rather awesome infographic about the social media war of the last few days. They analyzed the volume of conversation around both fake-Judgement day and Oprah’s final show on the specific day of said occurrence (May 21st and 25th, respectively). Based on Twitter, Facebook, video comments and other blog sources, the nopocalypse received over 6 times the amount of chatter as Oprah.

I guess despite being a horrible, vile human being, Harold Camping wins in one regard. 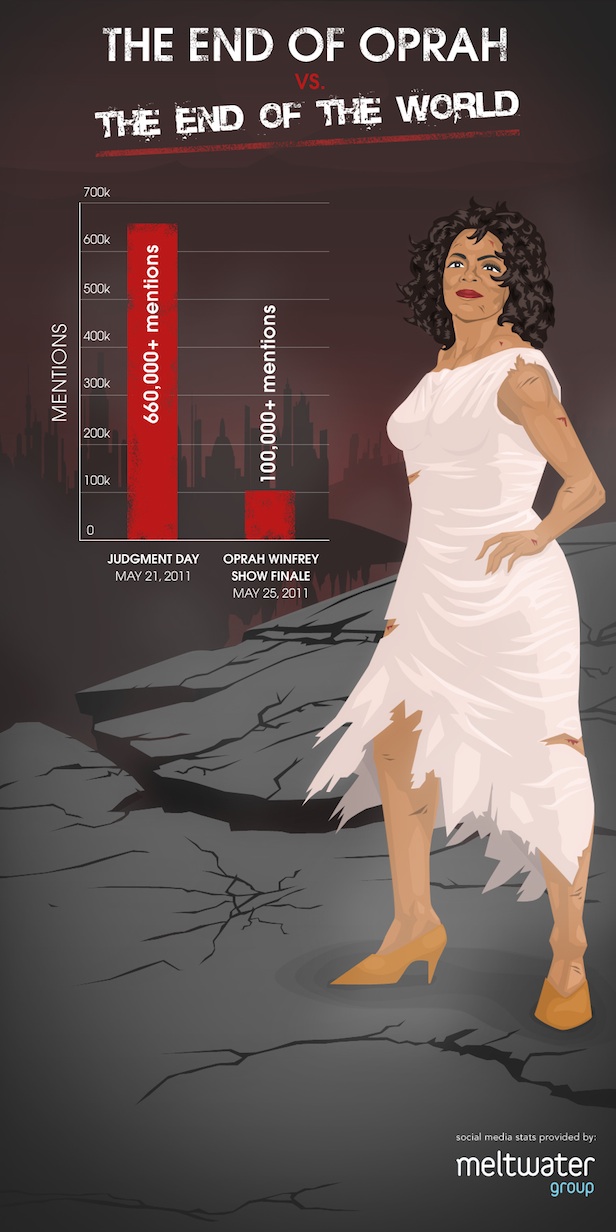 Google Wallet Aims to Turn Your Phone Into a Wallet

The Latest On Panda Straight From Google

May 26, 2011
Recent Posts
Registration is disabled.