The growth rate represents the fourth consecutive quarter of positive year-over-year growth after a year of flat or negative growth rates.

Retail e-commerce growth in the third quarter remained solid at 9 percent, a fairly positive indicator for the upcoming holiday season,” said comScore chairman Gian Fulgoni. “However, we continue to preach caution due to the continuation of high unemployment, which is creating very divergent spending patterns between the ‘haves’ and the ‘have nots.’” 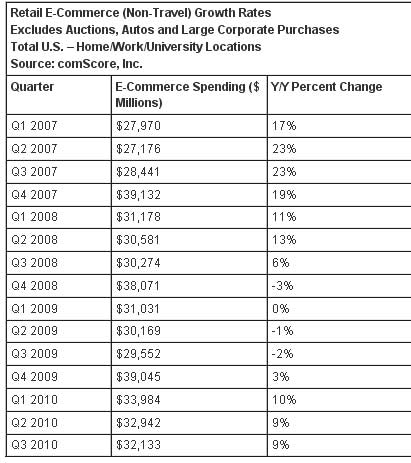 “Even Americans who do have jobs still aren’t confident enough to spend freely and many are still pained by their loss of wealth since the financial crisis struck in 2008. That and a higher consumer savings rate leaves less money for spending. Until the economy begins adding jobs at a meaningful rate, the lack of spending power among consumers will continue to be a drag on purchasing, with many consumers indicating their intention to cut back on gift buying this holiday season.”

Another Video Paints Google and Eric Schmidt as Creepy