Well, it’s been a little over a week since the DOJ brought the hammer down on popular online poker sites PokerStars, Absolute Poker and Full Tilt Poker.  The last 10 days have been filled with concern from amateur and professional players alike, as everyone wonders what the landscape of internet poker in the U.S will look like in the upcoming months.  As of today, it looks like everyone is still feeling the effects of the domain seizures and subsequent indictments.

As we told you last week, the U.S. government, PokerStars and Full Tilt poker reached domain name agreements a few days after the initial crackdown.  As part of those agreements, the .com domains for those sites will be restored in order to “facilitate returns of U.S. player funds.”

As of today, however, cash-outs are not yet available to U.S. players.  On the Pokerstars.com homepage, they link to a FAQ section that details where the company stands on money returns:

Your account balance is completely safe. You will be allowed to cash out your balance.

PokerStars has reached an agreement with the US Department of Justice that will allow players to cash out as soon as a suitable processor is found. This publically available agreement includes assurances from the DOJ that player cashouts can be processed safely. Cashouts for US residents are expected to be available within several weeks.

The Cash Out option in the PokerStars Cashier will temporarily be unavailable, to allow us to prepare the technical solutions and formulate the plan and processes required to allow you to cash out your balance. We will notify all US players as soon as this option is available again.

Providing you with the facility to cash out is our top priority right now, and hopefully US players will be able to cash out via the PokerStars Cashier in the near future.

Cashouts that have already been requested will be reversed and postponed to a later date, when they become available for everyone.  Money transfers to other players are also prohibited at this time.

Notably left out of that domain agreement announcement last week was Absolute Poker and its Ultimate Bet brand.  Since that announcement they have issues a statement regarding similar actions:

Absolute Poker has retained Blank Rome LLP as United States counsel to provide legal advice in relation to civil and criminal matters filed in federal court in Manhattan and made public on April 15, 2011. Absolute Poker is aware that on April 19, 2011, the US Attorney for the Southern District of New York entered into separate agreements with FullTilt Poker and PokerStars. These agreements concern the use of the respective www.fulltiltpoker.com and www.pokerstars.com domain names. The US Attorney, in a press release dated April 20, 2011, stated that the government is willing to enter the same agreement with Absolute Poker and UB.

Hopefully these refunds won’t take too long to begin.  Some people I know just might have rent money tied up in these sites. Ahem. 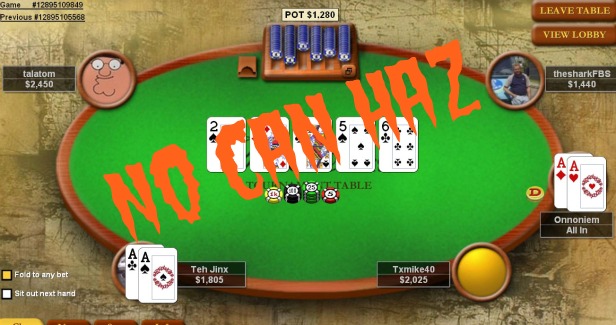 Moving slightly away from the online impacts, Black Friday has led to some notable repercussions among the non-virtual world.  In the wake of the takedown, ESPN pulled poker advertising and certain televised poker events from its programming.  The PokerStars-sponsored North American Poker Tour as well as advertising paid for by online poker sites was axed.  The World Series of Poker will air as scheduled, however, to the collective delight of poker fans.

ESPN was not the only network to pull programming, as Fox and Game Show Network followed suit.  Fox pulled PokerStars’ The Big Game and Million Dollar Challenge while GSN has relegated its High Stakes Poker to only one night, Saturday from 10 pm to 3 am.

Some bricks-and-mortar tournaments have either been cancelled outright or downsized significantly.  Full Tilt’s Onyx Cup has cancelled its first two Las Vegas events and the World Team Poker championships in Vegas have been postponed.

Some online tourneys have reduced their prize pools significantly, for example Full Tilt’s FTOPS XX kicked off Saturday with a prize pool guarantee of $13 million as opposed to the original $38 million.  PokerStars’ SCOOP series downgraded from $45 million to $25 million guaranteed.  Thanks to Bluff Magazine for this tidbit.

Also, out of the 11 people officially indicted on April 15th, three have been arraigned and entered not guilty pleas.  These three include Utah bank exec John Campos and payment processors Chad Elie and Bradley Franzen.

Well, I still wanna play…what do I do now?

Even if the targeted sites being processing payouts soon, they have completely lost the ability to allow real-money play and to accept deposits. Playing on those sites isn’t an option.  Where else to get your fix?  Bluff has compiled a list of sites unaffected by this recent crackdown, many of which are offering deposit bonuses up to 200%.  These sites include DoylesRoom.com, PPNPoker.com and Bodog.com.

This obviously raises the question of security.  It’s fair to wonder how long these sites have before something similar to Black Friday happens to them.  But to the poker players with the cojones to pony up cash at this time, there are options.

As one commenter put it, “I think the best thing Poker players can do is flood these sites. If we force the government to play whack a mole… eventually this will force their hand into sensible legislation. If whenever they succeed at bringing one or two down, and others immediately arrive to fill the vacuum, they may soon see it as an overall losing battle with us.  I, for one, will be playing in a few of these rooms and hope to see many US and world players there”

Right on soldier.  I must confess that I may, unfortunately, lack the gumption to follow in those brave footsteps.  As hard as it is, the right thing might be to wait this one out – if only for a bit.  Or maybe I am over-thinking this, so…shuffle up and deal?

The Good, the Bad and the Funny…ish

The immediate aftermath saw poker lovers take to social media to vent their frustration, attempt to calm people down or to kick the online poker community while it was down.  The response has continued to be interesting if nothing else.

U.S. representative Barney Frank, always highly quotable, chastised the Justice Department and the White House for what he feels is a waste of resources and screwed up priorities.  He said the administration is “protecting the public from the scourge of inside straights” and asked that they “go after the people responsible for empty house, not full house.” (Yuk yuk)

While the poker-twitterverse has calmed, high profile individuals are still snark-tastic.  Take for instance Norman Chad’s tweet from earlier today:

@NormanChad
Norman ChadIf Obama played online poker, I guarantee you the U.S. Attorney’s Office for the Southern District of New York would’ve been shut down.

The blame Obama train has seen its share of boarders.  Along with some representatives in Congress and Norman Chad, there’s this, whatever it is:

Where do you stand with all the online poker hullabaloo? Will you play at an alternate site or wait it out? What do you think the future looks like for the game? This writer is feeling somewhat of a rare emotion for him – optimism. Are you?

Overstock.com No Longer Penalized by Google

Facebook Send Button Should Send Targeted Traffic to Your Site