Online Newspapers Attract More Than Half Of Internet Audience

More than 123 million Americans visited newspaper websites in May, representing 57 percent of the total U.S. Internet audience, according to a new report from comScore. 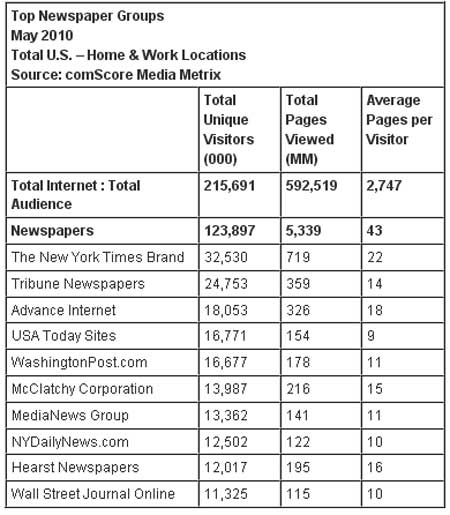 "The good news for publishers is that even as print circulation declines, Americans are actually consuming as much news as ever – it’s just being consumed across more media," said Jeff Hackett, comScore senior vice president.

"The Internet has become an essential channel in the way the majority of Americans consume news content today with nearly 3 out of 5 Internet users reading newspapers online each month. As news evolves towards a more digital model, the issue is not attracting the eyeballs, but rather demonstrating the true value of those eyeballs to advertisers. As advertising rates for digital move closer into line with those of traditional media, the economics of the news business should begin to look a lot more promising."

comScore’s Ad Metrix service found among the top site categories where display ads appeared in April, online newspapers accounted for 2.4 percent of impressions but a higher 6.7 percent of display advertising dollars. The average cost per thousand impressions (CPM) on online newspaper sites was $7, higher than each of the other top site categories and nearly three times the average CPM for the total U.S. Internet at $2.52.

"Online newspapers represent premium inventory for advertisers," added Hackett. "comScore research conducted last year for the Online Publishers Association showed that visitors who are exposed to display ads on news sites are more likely than average to visit the advertiser website, are heavier online buyers and tend to have higher household income."

"Online news publishers are also leading the way in the use of newer display ad formats, which are aiming to create a richer, more engaging experience for consumers."