Online holiday spending during 2009 reached $29.1 billion, representing a four percent increase over the same period last year, according to a new report from comScore.

"The 2009 online holiday shopping season was a positive one as its growth rate slightly surpassed our forecast and returned to solidly positive rates after nearly a full year of marginally negative growth," said comScore chairman Gian Fulgoni.

"Among the highlights of the season was the first $900 million online spending day and a strong late season spending surge, propelled by effective retailer promotions, guaranteed shipping and a major snowstorm on the eastern seaboard that convinced many to shop from the comfort of home." 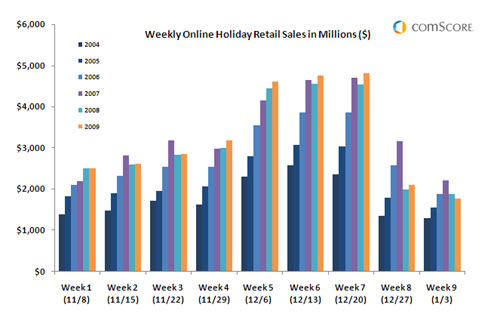 Tuesday, December 15 was the heaviest online spending day of the year and of all time, at $913 million, one of nine individual spending days to surpass $800 million during the 2009 holiday season.