Netflix is King of the Internets.

Real-time entertainment it described by Sandvine as any application the allow on-demand content that is consumed as is arrives. This includes services like Netflix, Hulu, YouTube and Spotify. According to their study, real-time entertainment makes up 49.2% of all internet traffic during peak evening hours. In 2009, it only accounted for 29.5% of the traffic. 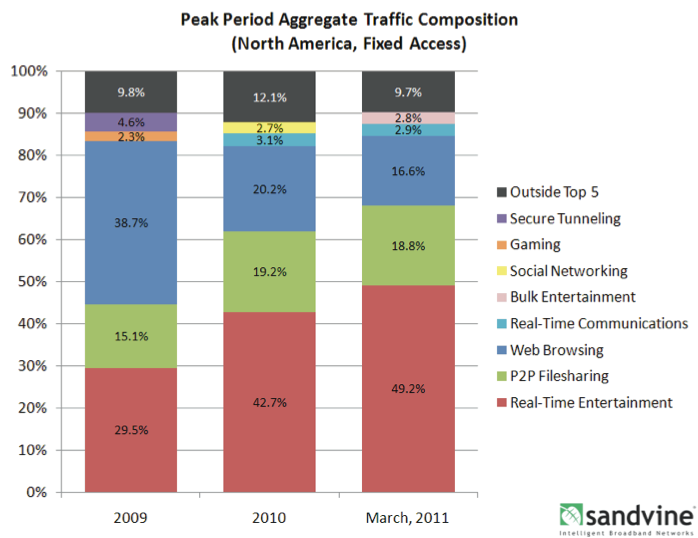 A really interesting find from this study involves the share of traffic devoted to P2P filesharing. The current share is 18.8%, which is only down .4% from 2010. It would seem that, almost counterintuitively, the boom in streaming content has not really hurt P2P filesharing. From the study:

Despite the emergence of an “on-demand” mentality, P2P networks have maintained a relatively consistent share of Internet traffic, and absolute volumes continue to increase. Opinions no doubt remain divided as to whether P2P’s staying power is evidence of widespread piracy or mainstream acceptance of the ease of distribution that P2P networks like BitTorrent provide for content creators.

Also, perhaps a shock to some, Social Networking is 6th, only accounting for 2.1% of peak hour traffic.

The emerging of real-time entertainment traffic as the dominant force in internet consumption translates to Netflix becoming the top dog when it comes to bandwidth usage.

Within North America specifically, the continued growth of on- demand applications is largely fuelled by the runaway success of Netflix, which now accounts for 29.70% of peak period downstream traffic. This share represents a 44% increase over the figure presented in the Fall 2010 study. Even when measuring total traffic and averaging over 24 hours, Netflix, with 22.2% of traffic, has overtaken BitTorrent (21.6%) as the largest component of Internet traffic on North America’s fixed access networks.

The study took into account hundreds of millions of subscribers in over 85 countries, so it also compiled statistics from Latin America and Europe as well.

In Latin America, real-time entertainment also places 1st in internet traffic, but not by a very wide margin. It only bests web browsing 27.5% to 24.9%. P2P filesharing takes 18% of the share. Interestingly, Facebook makes up a whopping 13.25% of the traffic during peak hours. It only makes up 1.86% in North America.

In Europe, real-time entertainment is also the winner, taking 33.2% of the share of traffic. But in a close second place is P2P filesharing, garnering 30.1% of the peak time traffic. This is up almost 300% from 2010. BitTorrent is the clear leader in both upstream and downstream traffic in Europe.

So it looks like streaming content is the biggest source of internet traffic across many parts of the globe. And here in the states, we see that during peak evening hours, most people are watching videos through Netflix.

Do Bing's New Facebook Features Make it a Better Search Engine Than Google?

May 17, 2011
Recent Posts
Registration is disabled.