Netflix Price Hike Opens the Door for Blockbuster – According to Blockbuster

As the fallout continues from Netflix’s decision to split up its streaming and DVD services and charge more for DVDs, many are wondering if and how that anger will translate into losses for the company. Sure, people are outraged, that is clear. But will people walk the walk when it comes down to it? Will they actually drop Netflix or are they just bitching about it now?

Blockbuster thinks that this climate of frustration could be good for their business, and have said so in a release posted to their official blog –

As part of Blockbuster’s ongoing efforts to provide the ultimate in convenience, choice and value, Netflix customers who switch to one of Blockbuster’s two most popular Total Access plans will receive a 30-day free trial. After the free trial, customers will continue to receive Total Access for a new everyday price of only $9.99 per month for “1 Disc” at a time or $14.99 per month for “2 Discs” at a time.

So, if I understand this correctly, Blockbuster is going to charge $9.99 for the 1-DVD-at-a-time deal, whereas Netflix is going to charge $7.99. For that extra two dollars, customers would get new releases earlier, games and blu-rays included in the deal. When you look at it that way, it sounds like a solid option.

Here’s the problem: Blockbuster doesn’t offer a streaming subscription, and most people value that option. That means that they are likely to keep their Netflix streaming service. People who don’t value DVDs and new releases as much will most likely chose to forgo the $7.99 DVD plan offered by Netflix. And they probably won’t want to have another monthly charge from Blockbuster either.

Going forward, it seems like the most popular option will be to keep the $7.99 Netflix streaming service and just hit the Redbox for any new releases that you can’t find on Instant.

And of course there’s the download option, which this funny little flow chart captures beautifully. Enjoy – 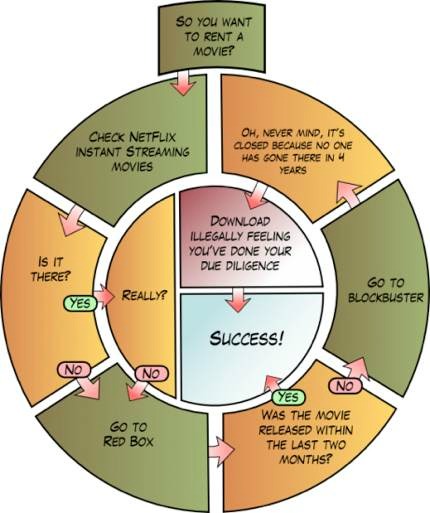 Microsoft Doing Something Else with Social Search (Internally)