NASA And Gowalla Partner On Virtual Search For Moon Rocks

NASA has partnered with Gowalla to create new ways for people to learn more about space exploration and the agency in general.

The partnership populates Gowalla with NASA-related information and four virtual items — moon rocks, a NASA patch, a spacesuit and a space shuttle — that can be found at agency-related venues.

“NASA’s partnership with Gowalla is a creative way for us to reach out and share information about what the nation’s space agency is doing," said Bob Jacobs, NASA’s deputy associate administrator for communications at NASA Headquarters in Washington. 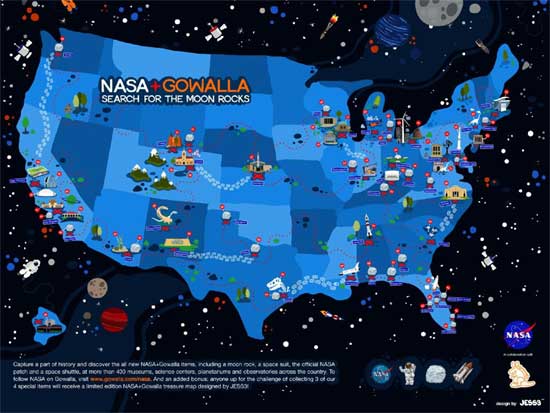 Gowalla users who virtually "check-in" at NASA-related venues and places of discovery via their smart phone have a chance to find the four agency virtual items which can be traded for other items, dropped in locations or kept in their vault.

Anyone with a Gowalla account who collects three of the four items will receive a special pin in their Gowalla Passport. In addition, the first 100 people to collect three items will win the special edition NASA+Gowalla Map: Search for the Moon Rocks by JESS3, a creative agency that specializes in data visualization.

If Your Blog's Mobile Experience Sucks, You're Throwing Away Traffic