The majority (85%) of women on Facebook indicate they have been annoyed by their online friends, according to a new survey from daily deals site Eversave.

Eversave surveyed more than 400 women on Facebook and found they have little tolerance for friends who use the site to brag or overshare.

*Complaining all the time (63 percent)

Women do see some positive aspects of Facebook. Women appreciated the site for allowing them to see friends’ photos and videos (91%) and helping them search for old friends (76%). 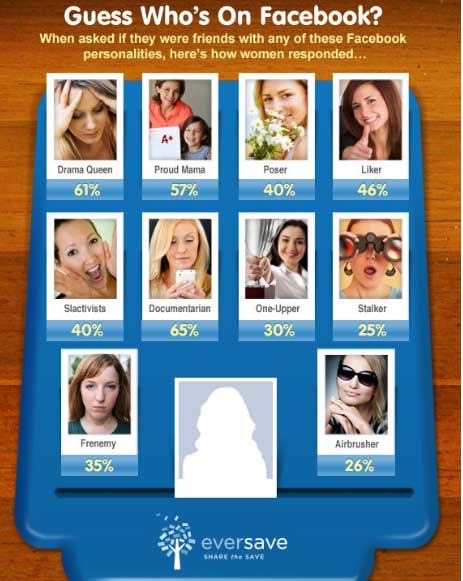 Survey respondents opened up about their true feelings when asked if they were friends with any of these online personalities:

*The documentarian, they update their status with their every move (65 percent)

*The drama queen, everything’s a crisis with this friend (61 percent)

*The proud mama, they think Junior’s every move is newsworthy (57 percent)

*The poser, they project an image of life so perfect, and it’s not true (40 percent)

“The ironic issue is that many women may not even know they are being classified or thought of that way by their Facebook friends,” said Charlene DeLoach Oliver, JD, CISR, an attorney-turned-Blogger at CharleneChronicles.com.

“Most people regard social media, like Facebook, as a place to gripe or boast because they often can’t do it in real life. In the alternative, they also use it as a tool to connect with people, stay abreast of breaking news, and find great deals, contests, and giveaways.”