Mobile Market Up In Q4 Driven By Smartphones

The global mobile phone market grew 17.9 percent in the fourth quarter of 2010, a new quarterly high driven by smartphones, according to a new report from IDC. 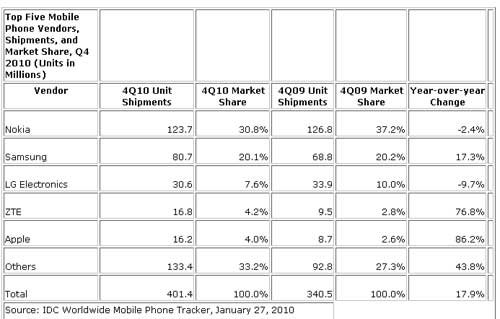 The strong quarterly and annual growth comes after a weak 2009, which saw the market decline by 1.6%. A stronger economy and a wider array of increasingly affordable smartphones helped lift the market to its highest annual growth rate since 2006 when it grew 22.6%.

"Mobile phone users are eager to swap out older devices for ones that handle data as well as voice, which is driving growth and replacement cycles."

It’s not just smartphone-focused suppliers that capitalized on the mobile phone market’s renewed growth last year. ZTE, a company that sells primarily lower-cost feature phones in emerging markets, moved into the number 4 position worldwide in 4Q10. It is the first quarter the Chinese handset maker finished among IDC’s Top 5 vendors.

"Change-up among the number four and five vendors could be a regular occurrence this year," added Ramon Llamas, senior research analyst with IDC’s Mobile Devices Technology and Trends team.

"Motorola, Research In Motion, and Sony Ericsson, all vendors with a tight focus on the fast-growing smartphone market who had ranked among the top five worldwide vendors during 2010 are well within striking distance to move back into the top five list."