The number of Americans who accessed financial accounts (bank, credit card, or brokerage) via mobile devices reached 29.8 million at the end of 2010, a 54 percent increase over 2009, according to a new report from comScore.

“More people are turning to the convenience of mobile devices for their financial service needs, fueled in part by the adoption of smartphones, 3G devices and unlimited data plans,” said Sarah Lenart, comScore vice president.

“The ubiquitous nature of mobile devices affords financial brands an important channel to reach and engage customers, whether it’s at home, work or on-the-go. As brands compete for customer loyalty in this competitive market, marketers will need to focus on continually improving the mobile customer experience and adjusting to the changing landscape and consumer needs as they access their financial information.”

Mobile browsers were accessed by 18.6 million users to view financial information in the fourth quarter of 2010 , up 58 percent from the previous year, 10.8 million accessed their accounts via applications, up 120 percent. SMS (text message) represented the smallest access point for financial service audiences with 8.1 million users, up 35 percent. 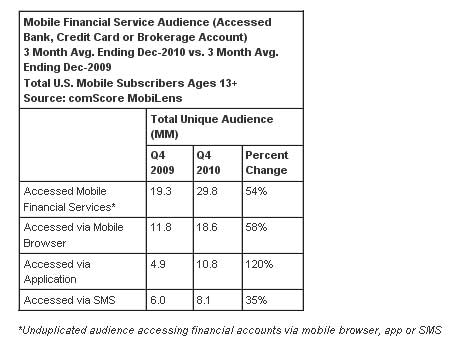