Mobile advertising firm Millennial Media has put out a report mobile devices and their impact on advertising. "For the past year Millennial Media has released a monthly SMART report (Scorecard for Mobile Advertising Reach and Targeting), which discusses trends in the mobile ad space. Beginning this month, they’ve decided to release an additional device-focused report, the Media Mobile Mix," a representative for the firm tells WebProNews.

"The Media Mobile Mix will highlight monthly device-focused trends, including growth, percentage of ad impressions, etc," she adds. "For example, data for March shows that although Apple continued to represent the majority of impressions, the number served by Android and connected devices, like Sony PSPs or iPads, increased drastically."

Some other interesting data from the report:

– Apple’s OS remains the leading OS on our network in March with 70 percent share of Smartphone impressions.  Apple’s OS has maintained the leading OS position since Millennial began reporting OS mix in August 2009.

– RIM remained the second largest OS for the eighth consecutive month with a 14% share of impressions; and four devices in the Top 20 Mobile Phone ranking.

– While Apple represented 40% of overall network impressions in March (top slot for the 6th consecutive month); manufacturers supporting Android enabled devices represented over 50% of the Top 15 Manufacturers.  Samsung was firmly embedded as the second largest manufacturer on our network, with four devices in the Top 20. 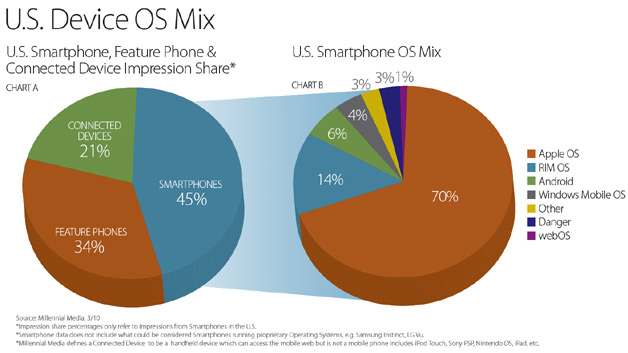 "As the largest independent mobile advertising platform in the U.S., we support every major operating system and device. In March, one out of every five ad impressions on our network were seen on a mobile connected device, and not a mobile phone," said Erin (Mack) McKelvey, SVP of Marketing, Millennial Media. "We have reported monthly device trends from our network for a year, but given the proliferation of smartphones and connected devices, we felt that it was now time to spotlight this data for industry-watchers who are trying to understand the role of devices and consumer behavior in the overall mobile market."