Starting sometime around the first of March, Microsoft is going to give Europeans an obvious chance to pick something other than Internet Explorer as their Web browser.  And starting today, Microsoft’s given the whole world a chance to see what its "Web browser choice screen" looks like.

This ballot screen has been in the works for a long time.  The process began when European regulators objected to Windows and Internet Explorer being bundled together.  Then, a proposal that would have put all of the different browser choices in alphabetical order was vetoed.

Eventually, all of the parties agreed upon displaying the browser’s names in a random order.

Now tests are set to begin next week in Belgium, France, and the U.K., with a full-scale rollout planned for early March.  The browser choice screen software will reach people via Windows Update, and should (except for the order of the browsers) resemble the picture below. 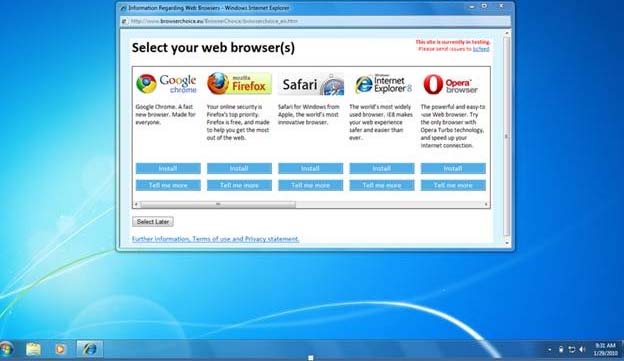 Microsoft seemed rather pleased to announce that all of this is taking place ahead of the European Commission’s schedule.  We’re just very curious to see what Internet Explorer’s market share will look like come April.

PleaseRobMe Hits Foursquare Users with a Dose of Reality

Could ChatRoulette Become the Next Social Hit?