This morning, the world’s most elite golfers are beginning their quest for the green jacket at the 2011 Masters Tournament in Augusta, Georgia.  The first major of the year always has its share of storylines, this year being no exception.  Golf fans wonder if no-longer-top-ranked Tiger Woods can bounce back from a dismal 2010 following his off-the-course indiscretions.  Some are anxious to see how many fans show up for the tournament, as the PGA has reported declining attendance.  Also, 19 year old Japanese phenom Ryo Ishikawa has pledged all of his tournament winnings to the earthquake and tsunami relief effort in his home country.

If you are like many golf fans, work oftentimes prevents you from following the first few rounds in their entirety.  To help with this, Augusta National has developed an app for the iPhone and iPad that allows fans to keep up with the unofficial kick-off of the 2011 golf season.

The darling of the app, however, is the live video.  Users can watch live streaming video from holes 11, 12 and 13 (aka Amen Corner) as well as holes 15 and 16.  As golf fans know, Amen Corner at Augusta National provides some of the most exciting moments of the whole PGA Tour season as more than one dream will be gobbled up by the swirling winds around Rae’s Creek. 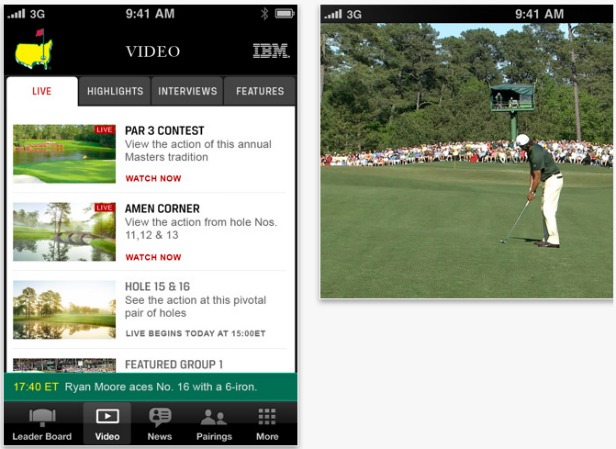 The iPad version is $1.99 and adds more live video streams of featured pairings as well as more highlights from ESPN and CBS.

Some users are reporting video crashes and loss of sound on the iPhone.  Hopefully this is only temporary, as this app could be a godsend for golf fanatics who can’t be near a computer or television.

As a big lefty myself, I have to throw in my support for reigning champ Phil Mickelson.  Go Lefty!

Is Location as Effective as Social Media?