Marketing Lessons from a Guy in His Underwear

As you might imagine, social media marketing is one of the most discussed topics throughout the BlogWorld & New Media Expo this week in Las Vegas. Thousands of people are gathered at the Mandalay Bay to get advice and ideas to take home with them to their companies and help their brands excel online.

David Griner and David Peck of Luckie & Co. and Meshin respectively, ran down some recent case studies from brands harnessing social media and building campaigns around social tools. They avoided the more well-known examples from brands like Comcast, Dell, and Zappos, and instead focused on efforts from brands like the Discovery Channel, Cosmopolitan Magazine, Pee Wee Herman, Naked, Edge, NBC, and Stanfield’s. The one that seemed to get the greatest amount of praise from the audience was the last, the one from Stanfield’s. This campaign is actually currently in full swing.

Stanfield’s is a Canadian underwear company, and they’ve put up a site where users can watch a cancer survivor hang around his home in his underwear. 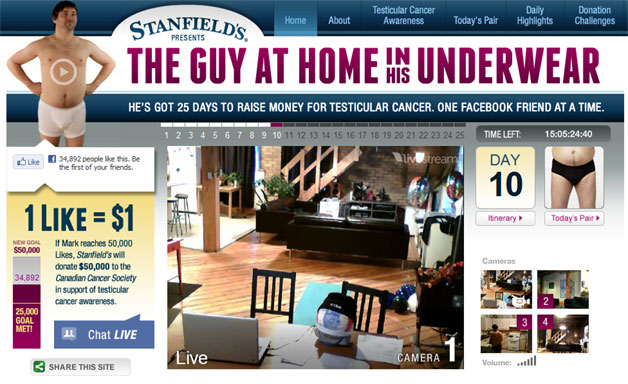 The campaign is a branded charity effort. The guy is locked in his apartment for 25 days. The company set a goal of getting 25,000 Facebook likes, and gaining $25,000 for the Canadian Cancer Society. Users can donate a dollar to make the guy do stuff. If one particular task gets support from 500 people, he has to do whatever that task is. For example, some want to see him fry bacon, or wax his chest.

It didn’t take long until the company had to extend its goal to 50,000 likes because it reached its initial goal so quickly.

While it no doubt helped that the campaign contributed to a good cause, the company presented it in a way that just inspired people to to engage. It was original. People like the idea of being able to control others, and when it helps cancer research at the same time, it’s a win win.

We won’t get into all of the other campaigns these guys discussed. You can probably find more about them with a few Google searches. Just know these three takeaways the two Davids left the audience with:

1. Be clear in your goals, and make it easy for your audience to help you reach them.

2. Be original, even if it means risking the unknown.

3. Base your ideas around the real reasons people like your brand.

What is the most effective social media marketing campaign you’ve seen from a brand? What made it effective? We’d love to hear your comments.