Over a year after Apple announced the iAd advertising format that was supposed to revolutionize mobile advertising, we heard absolutely nothing about it at this week’s developer conference in San Francisco. 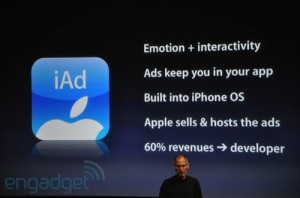 Apple trotted out impressive stats about all kinds of things, but there was no mention about iAd penetration, revenue driven, or new capabilities.

Apple doesn’t really miss opportunities to talk about their success, so it’s probably safe to say that the iAd has been a bit of a disappointment so far.

When Apple launched the iAd, people had high hopes for what they might be able to do for the mobile advertising industry. A lot of the common thinking was that Apple had revolutionized so many other industries, that perhaps they could do something new and amazing with these high quality mobile ads.

While Apple wasn’t in the advertising business like other companies, people thought their creativity and successful ad campaigns of their own might allow them to take mobile advertising to a new level.

Not so fast my friend.

Dan Frommer from AlleyInsider did an article about the iAd progress in March. Some notable things in it were that the price of iAds was cut in half, there was a mixed reaction from agencies, and that the iAd sales team had lost a bunch of people.

Outside of the advertising industry, I don’t feel like the iAd has had much impact either. As a user of many iPhone apps, I can’t ever recall even seeing an iAd. Perhaps I have, but if so it definitely wasn’t memorable. And I’m somebody who actually cares about advertising!

Apple can obviously choose to do what they want and experiment wherever they want. However, I’m not sure advertising is in their core DNA. After all, at the developer conference yesterday Steve Jobs himself said in reference to their mail product:

“No ads,” he boasted. “We build products that we want for ourselves, too, and we just don’t want ads.”

That doesn’t sound like the CEO of a company that really is 100% behind mobile advertising.

Or perhaps, is mobile advertising just going to really take off when it’s entirely different and more of the form of location-based deals? But doesn’t that only work for local businesses? How do national brands get in front of people on their mobile device?

The answers still aren’t there, but as more of people’s computing time AND entertainment time shifts to their mobile devices, you can bet there will be a lot of companies trying to figure out how to get in front of people. Just don’t expect Apple to solve it.