The Ultimate Fighting Championship said today that people will be able to watch -for free two live preliminary fights from its Fight For The Troops 2 event on Saturday, January 22 at 8 p.m. ET by clicking the “Like” button on its UFC Facebook page.

By liking Facebook.com/UFC, fans will have access to a live stream of the lightweight fight between Cody McKenzie (12-0) of The Ultimate Fighter and veteran Yves Edwards (39-16-1), as well as a  welterweight match with TUF alum DaMarques Johnson (16-8) against Mike “The Joker” Guymon (13-4-1). 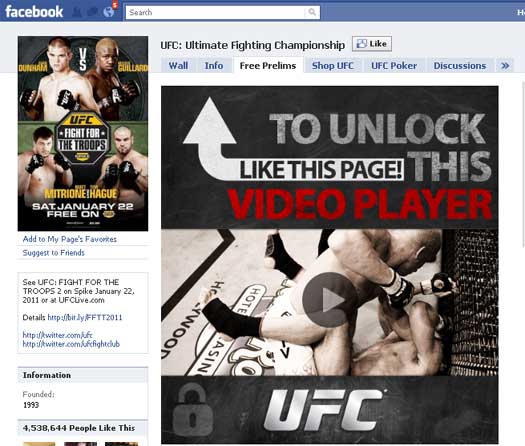 “I’m always looking for ways to give fans fights for free and this is just another example of that,” UFC President Dana White said.

“Facebook is such a great tool for people to stay connected and we’re excited to put two live fights on our UFC page for free.”

In addition to the live stream of two prelims on Facebook , the UFC is hosting an online auction that will raise funds for the brave men and women in the United States Armed Forces with traumatic brain injuries. Prizes include the chance to attend the premiere of season 8 of the show Entourage, as well as the chance to meet Philadelphia Phillies centerfield Shane Victorino and attend a Major League Baseball game as his guest.

Is Bing Growth Being Inflated By Shady Sites?