Less Than Half Of Americans Read A Daily Newspaper

Less than half (43%) of Americans say they read a daily newspaper, either online or in print almost everyday, according to a new report from Adweek Media and Harris Interactive. 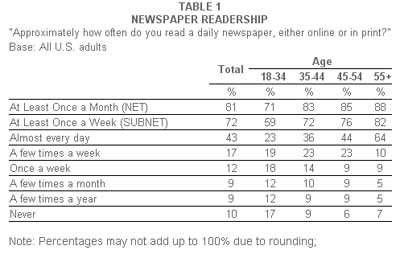 One potential business model newspapers have considered is charging a monthly fee to read a daily newspaper’s content online. More than three-quarters (77%) of Americans say they would not be willing to pay anything to read a newspaper’s content online. While some are willing to pay, 19 percent would only pay between $1 and $10 a month for online content and only 5 percent would pay more than $10 a month.