Instead of simply offering a reworked logo featuring Chaplin’s iconic derby hat and cane, this particular doodle took a page from the Pac-Man celebration logo, but instead of an embedded video game applet, the Chaplin theme features a YouTube video celebrating the actor’s style. The video is made in the same spirit as a fan film instead of using Chaplin’s likeness, apparently. Featured within the black and white video is a shot of the Chaplin lookalike walking past the Google logo.

As indicated, the countries seeing the Charlie Chaplin themed Google homepage are countries that are already celebrating April 16th, meaning it won’t be officially seen in the United States for another 14-plus hours (as of this writing). Unofficially, here is a screenshot and the video in question: 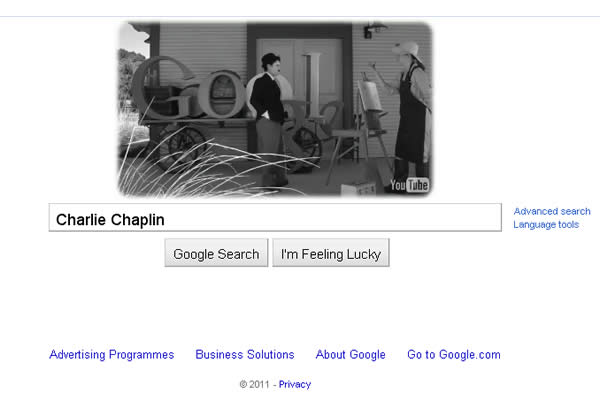 Once again, Chaplin’s birthday falls on the 16th of April, but for those of you who just can’t wait to see (and interact) with Google’s latest doodle, you can check the UK’s version, or Australia’s, or, well, any country that’s already transitioned from the 15th to the 16th, and has a Google homepage. See more here.

For those Google doodle fans out there, do you have a particular favorite, or is there one you’d like to see in the future? Let us know in the comments section.