It appears as though Lady Gaga has grown tired of the microblogging world of Twitter and decided to take her influence to a slightly different format – Tumblr.

Her new Tumblr blog, Amen Fashion, has just popped up and contains only a handful of posts. At initial glance it looks like a fashion blog mixed with candid photos and other eccentricities from Mother Monster. The blog is photo-heavy so far but does contain some text, such as “I’ve learned love it like a brick you can build a house of sink a dead body.” 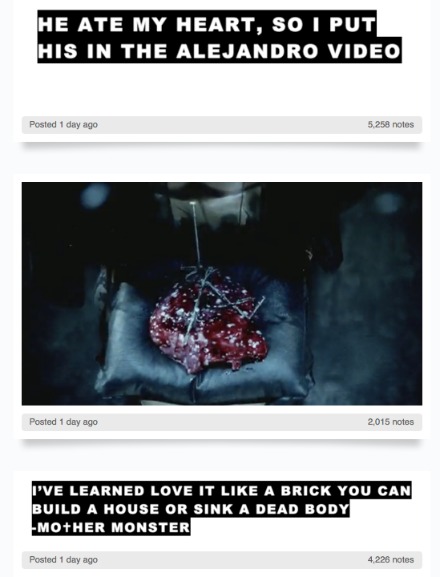 Tumblr is just the next step in the internet domination that Lady Gaga seems to have planned. She is not only a force on Twitter, but the force. Her 11.2 million plus followers make her the most popular person on the entire service. She is also approaching 40 million likes on Facebook. When Gaga’s new album “Born This Way” was announced as a 99 cent download on Amazon, she crashed their servers.

How popular is her Tumblr blog already? In its infant stages, her posts have thousands of interactions whether they be likes or reblogs. Her most recent post has 7,000.

And I’m sure Lady Gaga knows the potential to exert influence on the Tumblr world. The blog hosting site is doing quite well with over 7 billion posts spread out over 22 million blogs. President John Maloney just released some stats on his blog that shows Tumblr with 8.4 billion page views a month.

Zap2It reports a little bit of drama involving Gaga’s new blog. Apparently she wanted the name “Amen Fashion” but it was already in use. They say that the fan in question with the Amen Fashion blog received this email from Tumblr –

Since Amen Fashion comes from the title of a Lady Gaga song, since you have never posted to amenfashion.tumblr.com, and since it is not the primary blog on your Tumblr account, we feel giving amenfashion.tumblr.com to Atom Management and Lady Gaga is the reasonable thing to do here. As you seem to be a massive Gaga fan yourself, we hope you see things the same way.

He apparently changed his user name to amenfashion1, but that wasn’t far enough away from Amen Fashion so he had to change it again.