Here’s one from the social media is awesome file:

Next time you think you are oversharing on social media, remember that all those pictures and updates you post are being read by hundreds of people – some of who might know something that you don’t know.

That’s what happened for Deborah Kogan. And she explains her story in a piece for Slate.com called “How Facebook Saved My Son’s Life.”

I know, that title seems a tad dramatic, but it really is the case that without Facebook, the story could have ended much differently.

On Mother’s Day, Kogan awoke to find her son Leo had a fever and a mild rash. Like any concerned mother she took him to a urgent care center that was open on Sunday. The rapid strep test came back negative, but it sometimes does with children. The doctor decided to treat Leo for strep anyways.

The next morrning her son’s condition had deteriorated. Not only did he have rashes, but he was also swollen. She posted a picture of Leo on the doctor’s exam table on Facebook. “Baby getting sicker, Eyes swollen shut. Fever rising. Might be scarlet fever.”

The next morning, his condition was even worse and Kogan was beginning to become extremely worried. She took a bunch of pictures with her iPhone and posted one to Facebook. It was the one that was the least dramatic, as she didn’t want to frighten her Facebook friends. She sent the rest to her family physician. Here’s that photo, courtesy of Kogan and Slate – 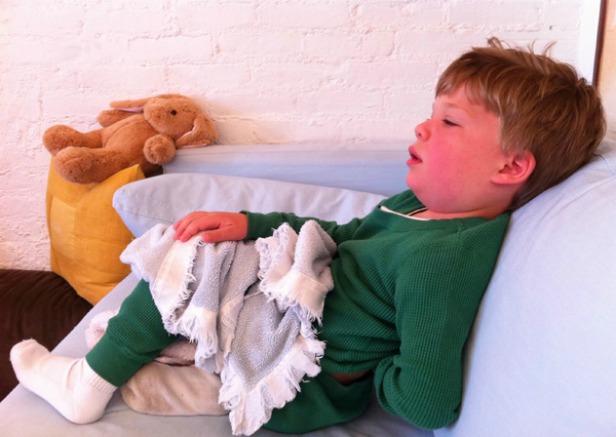 Just minutes later she was receiving calls and direct messages from people who had seen the photo on Facebook. Kogan’s former neighbor, her pediatrician friend and her pediatric oncologist cousin all suggested a strange diagnosis: Kawasaki Disease.

According to the PubMed government database, Kawasaki disease is a rare and not very well understood condition. From the database –

Kawasaki disease is a poorly understood illness. The cause has not been determined. It may be an autoimmune disorder. The disorder affects the mucus membranes, lymph nodes, walls of the blood vessels, and the heart.

Kawasaki disease can cause inflammation of blood vessels in the arteries, especially the coronary arteries. This inflammation can lead to aneurysms. An aneurysm can lead to a heart attack, even in young children, although this is rare.

Kogan decided to act on this Facebook-diagnosis even though it was an odd experience filling out the paperwork. From her story –

I called my family doctor and told him I was heading to the hospital. “I just have a Spidey sense,” I said, “that he’s really sick.” Not a lie, but not the whole truth, either, though what was I going to say? Three of my Facebook friends think my kid has an extremely rare childhood auto-immune disorder which I just read about on Wikipedia, and since they all contacted me after I posted a photo of him on my wall, I’m going? It seemed … wrong! Reactionary. And yet as much as I wanted to be my usual mellow self, the immediacy of the Facebook feedback was enough to push me out the door.

It turned out to be the right call, as her son was treated for the disease and subsequent liver disease triggered by the condition. He is still recovering from that.

One lesson that Kogan took from all of this – Facebook’s ability to “profoundly connect” people was a lifesaver. Not only in diagnosing the illness, but keeping her connected during the long nights in the cold setting of the hospital.

Do you think that social media is leaving the world a cold, desolate place void of any human interaction? For Deborah Kogan, at least, it was a lifesaver.

ESPN Gets Scorched On Twitter over Bruce Feldman Incident