Is it Becoming Less Critical For Businesses to Have Websites?

I don’t think there’s any question that you need a web presence to survive in today’s business climate. But do you still need a traditional website, or has the web moved on in that regard?

First off, let me be perfectly clear in that I’m not advising anybody not to have a website. That said, there are a lot of ways to have a web presence without actually having a site, and let’s face it – maintaining a site (let alone a successful one) takes time, money, and resources.

According to data from Compete, Facebook has become a bigger traffic source than Google for some sites, and for many others, it is right up there with Google as a major traffic source. If it can drive the traffic, then that means the people are already at Facebook. You can be on Facebook without having your own website. Businesses can build a Facebook Page, complete with analytics provided by Facebook itself, and they can spend time making that page a good one. Here are some tips on how to do that. Facebook pages are perfectly capable of being found in search engines. In fact, they are often right on the first results page.

You know what else is often right on the first page? A set of local search results from Google Maps, courtesy of Google’s Universal Search integration. Within those results (which are very often right at the top of the SERP) are links to individual businesses’ "Place Pages". From here, users can find coupons, reviews, store hours, etc. There is a very good chance users will find this before they find your site anyway. 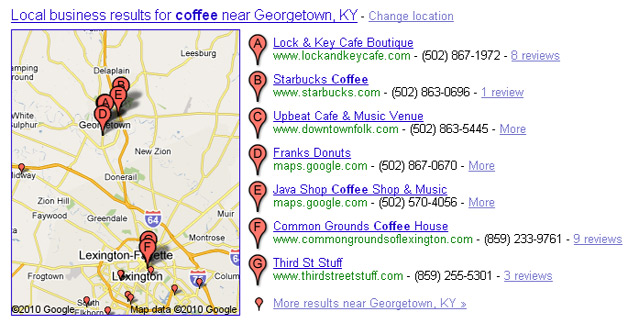 Google is actually going to great lengths to get people using these Place Pages. They are even sending out stickers with barcodes for stores to hang on their windows. When a user scans this barcode with their mobile phone, they will be taken to the business’ Place Page. Social media profiles can also appear on these pages (although so can website links of course).

I probably don’t have to tell you that the web is rapidly becoming more mobile. Smartphone usage and mobile broadband subscriptions continue to accelerate, and people are using a variety of devices, operating systems, browsers, and apps. Making sure you have a site that looks right across all of these is no easy task. This is not so much of a worry when it comes to Facebook pages, Google Place Pages, and other third-party entities.

In many cases, it seems that small business sites are becoming harder to find through organic search. If you look you can find them, but users want convenience, and they are probably not going to look too hard if they can find what they are looking for on the first search results page (or right within Facebook where they’re already spending their time).

Social profiles show in up in search, and often early. The very nature of social media is viral. If one Facebook user becomes a fan of your Facebook page, that user’s friends are going to see it. Then, maybe a couple of them also become fans. Then maybe a couple of their friends become fans, and that trend can continue on and on. The more people who become fans, and the more exposure that page gets, the more chance that page has of acquiring links, which of course can lead to better search engine rankings, not to mention a larger presence on Facebook itself, where a large percentage of Internet users are already spending a great deal of their time. Your reputation and following within the social networks themselves may do your profile well in the eyes of Google too.

If you sell things online, there are obviously many different options out there without having to sell from your own site. In fact, even Facebook and e-commerce are on the road to becoming more and more closely attached. People can buy/sell physical goods through Facebook.

A great deal of focus has been placed on Facebook in this article for the simple fact that it is the world’s most popular social network. That could all change in time. But that doesn’t mean the points would not sill apply to other services. Google is going to be placing a lot of emphasis on Google Buzz this year, and it’s going to become integrated with more and more Google products. Currently, Google profiles are kind of the central place for a Buzz presence. Users can include any links they wish right into that profile (Facebook page, Twitter account, blog, eBay/Amazon listings, etc.)There’s no telling how big Buzz can be, and there’s always the possibility that something else will come along and take the world by storm. And that is one of the reasons…

Why it Still Pays to Have a Site

Can you be successful without a site? I think so. However, having a site gives you a more stable foundation, and still creates more opportunities than if you didn’t have one. When you have a site, you have control. You don’t have to adhere to the policy guidelines of any third-party platform. If Facebook decides to shut its Pages down (as Yahoo did with GeoCities, for example), you still have your own site that they can’t touch. For that matter, having your own site certainly lends credibility to your brand.

Still, social networks continue to work on making data more freely able to flow among one another via a number of open standards like Activity Streams, AtomPub, OAuth, PubSubHubbub, Salmon and WebFinger. "The idea is that someday, any host on the web should be able to implement these open protocols and send messages back and forth in real time with users from any network, without any one company in the middle," says Google software engineer DeWitt Clinton. "The web contains the social graph, the protocols are standard web protocols, the messages can contain whatever crazy stuff people think to put in them. Google Buzz will be just another node (a very good node, I hope) among many peers. Users of any two systems should be able to send updates back and forth, federate comments, share photos, send @replies, etc., without needing Google in the middle and without using a Google-specific protocol or format."

Google itself, even has its own site dedicated to making user data for its various products exportable. That’s just Google, but the web in general appears to be moving more in this direction.

I’m not saying that you shouldn’t have a site, or even that you don’t need one, but I think it’s an interesting discussion. For now, I’m going to say having your own site is still in your best interest, but has a more social Internet with more portable data made a standalone site less critical? Is having a website going to be less important in the future? I’d be interested to hear your thoughts on the subject. Comment here.

Running a Promotion on Your Facebook Page May Cost You $10K